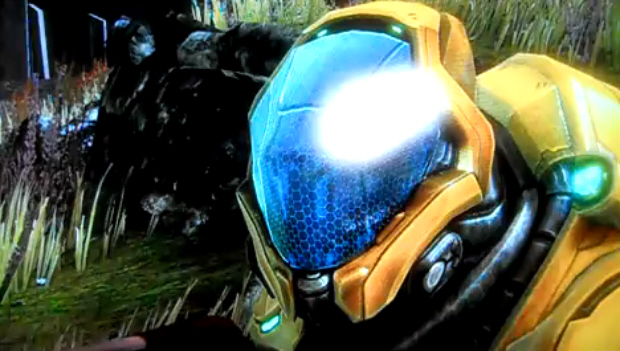 Looking for Halo Reach Golden Elite locations for the mysterious enemies found within certain levels of the hit Xbox 360 game? Our guide will show you where and how to encounter the few that are known to exist.

The purpose of these Golden Ranger Elites are not yet know, could they be smaller pieces of a bigger puzzle?

Where: The Package
You’ll find this Golden Elite located on The Package level. He is found immediately after Rally Point Alpha as you head towards the Sword Base garage. You can recognize this Elite because of his golden-colored armor and his pacifist nature of not shooting at you. If you engage him in combat he will toss grenades, try to melee you and offer you quite the fight. To successfully kill him, you must headshot him exactly after taking down his energy shield, if you fail to do so he will simply disappear.

Where: Winter Contingency
You’ll find this Golden Elite after you get in the truck. Roll to the left route to the river, and follow down the path to the large base ahead. You should see the Golden Elite. He is the same as the one above, and will flee away from the bridge to the right of the base, be sure to take him out! One difference is that this Elite is happy to use his firearm, which makes him even more difficult.

Here is video of the Golden Elite in action!

Where: The Pillar of Autumn
You’ll find this Golden Elite immediately after Rally Point Alpha. He is the same as above, and his specific location is in the garage to the right of the entrance to the base where you can find Data Pad #9.

Additionally, here is one more fun one!

Master Chief doesn’t appear in the newest Halo adventure . . . except for here!

We’ll add the rest of the Golden Elite locations as soon as they are found!

Thanks to HaloReachPlanet for these awesome finds!