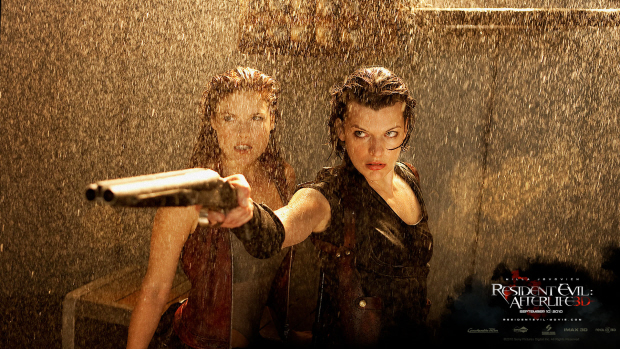 A Resident Evil 5 film will be made, confirmed Milla Jovovich, who plays the lead character, named Alice, across all of the successful Resident Evil films.

This comes hot on the heels of the successful debut of Resident Evil: Afterlife 3D that opened #1 worldwide this past weekend. The film was the biggest hit in the series yet and assured that another movie will be made. Money talks, as they say.

So what does director Paul W.S. Anderson and his wife Milla Jovovich (whom he met and married after directing her in the first Resident Evil film) and crew have planned for the 5th film?

Additionally, the new movie will involve decisions directly by the fans in a more interactive process, allowing the film to hopefully contain more elements that fans of the games want to see.

“This new Resident Evil is the first one to ever open at No. 1 worldwide. It’s the biggest movie in the franchise. So we’re definitely going to make another one. We’ve been talking to a lot of fans on Twitter and stuff, so it’s probably going to be one of the first movies where we really talk to fans to see what they want, and what characters they want to see. It’s going to be a more interactive process.”

She additionally asks fans to send their ideas and desires for the 5th film to her official Milla Jovovich Twitter.

Here are some additional choice Tweets from Milla regarding RE5:

“Thank you all so much 4 all your grt comments on the film! I’m SO happy u all love it!Hve fun watching RE4 this weekend! Let’s do RE5 soon!”

“Well on my way 2 germany now! What a whirlwind press tour, but it was worth it cause RE4 rocks and its #1 worldwide! Biggest RE EVER!”

“@Turanlilar no, but we hve sum grt ideas 4 another RE! n i’ve been telling paul sum of the ideas from fans as well 4 another script!”

“well, thank you guys again for the incredible worldwide success of #RE4! i have to go get going and rehearse for tomorrow! u guys rock! -m”

Currently Milla Jovovich is already filming the upcoming “3 Musketeers” film (or “3M”) where she plays Milady de Winter. The film is being shot in stereoscopic 3D and is being directed by Paul W.S. Anderson for an October 14, 2011 release. She is also set to star in David R. Ellis’ horror film Bad Luck as well as Famke Janssen’s debut directional film Bringing Up Bobby, both coming in 2011.