Hello guys and girls, here’s a Professor Layton and the Unwound Future preview of the upcoming Nintendo DS game.

The game will be released in America this coming Sunday (September 12, 2010). It was released in Japan way back in November of 2008 under the title, “Professor Layton and the Last Time Travel”, and is only now hitting the West two years later.

This game has the most voice acting of any game in the series, and it is also full of glorious cutscenes, so that must be the reason for the long wait. They had so much audio to translate. Europe will get the game, under the title “Professor Layton and the Lost Future” on October 22, 2010 with Australians getting the game before then on September 20, 2010 (which was the original US date as well, but they actually moved it UP to the 12th).

The game is an adventure title, where you explore various locations, tapping the screen to gain info or comments from “renowned archaeologist” and master puzzle solver Professor Layton and his apprentice Luke. By tapping the shoe icon in the bottom right corner you can move about the different frames or “scenes”, which are generally still pictures as you’d expect from an Adventure game. Most scenes will contain a character or two that you can talk to by tapping them and doors you can enter that lead to various shops or other locations. You can also tap specific objects in the environment to earn “Hint Coins”, which can be used to purchase hints on difficult puzzles. 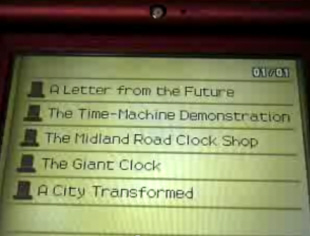 Naturally, the puzzles are the main focus of the series. About every other scene you’ll encounter a character or tap an object that will present you with a puzzle to solve. These puzzles were designed by 84-year-old Japanese “Puzzle Master” Akira Tago of Chiba University, who is infamous for his puzzles throughout the decades. Personally I found the puzzles in Unwound Future to be more difficult than those of Diabolical Box, and most of the initial puzzles revolve around time or clocks. Developer Level-5 took pains this time to try and make the puzzles fit in better context with the storyline.

Keep an eye out for our Professor Layton and the Unwound Future walkthrough video guide which will show you how to solve each puzzle.

Here is how the plot breaks down, straight from the instruction manual:

A LETTER FROM THE FUTURE
Meet Professor Layton, world-renowned archeologist and enthusiast of puzzles, riddles, and all things mysterious. His sharp wits and keen intellect have led him to solve many baffling mysteries, and he’s earned much fame for doing so. One quiet London morning, a strange letter makes its way to the Professor. The envelope containing the letter is inexplicably postmarked with a date from 10 years in the future. Stranger still is the sender, who claims to be Luke from the future!

“Professor, the London I’ve we know and love has been thrown into absolute chaos. I know this is a lot to take in, but I’ll explain it all soon. For now, I ask thtat you head to the Clock Shop on Midland Road”.

Professor Layton senses that this baffling letter is connected to some recent strange events of disappearing scientists. With no other clues to go on, the Professor and Luke set out for the Clock Shop mentioned in the letter.

Neither Professor Layton nor Luke knows that a portal to another world awaits them within that tiny shop. Upon exiting the shop, the duo encounters and unbelievable site. Is this the London of the future? Trapped in a London bizarrely different from their own, the Professor and Luke will encounter many baffling mysteries and puzzles, but can they solve their way to the truth?