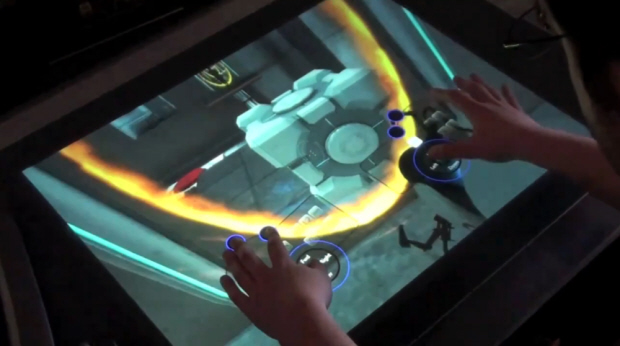 Get a glimpse at the future TODAY!

Okay that was kinda corny. But check out a video of the Microsoft Surface, the company’s table-like touch-interface computer device, being used to play two different games: Valve’s Portal and Microsoft Flight Simulator.

It basically plays exactly as you’d imagine . . . like an oversized iPod Touch, iPhone or iPad. A really, really big iPad.

The game’s are being played using “DREAM”, which stands for “Dynamically Resizing Ergonomic and Multi-touch”, a control scheme developed by Mark Micire which has been expanded on by University of Massachusetts Lowell Robotics Lab student Eric McCann who hacked it to create a version that runs on the Surface and allows for an on-screen joystick driver that makes it easy to control videogames on the device, including flight simulators, first-person shooters, and others.

The DREAM dynamically resizes itself to the size of the user’s hands as they move their hands anywhere on the MS Surface, and it gives for a really, really cool demo.

As you can see in this video.