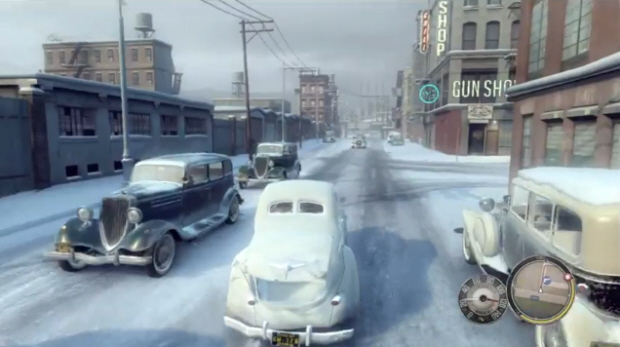 In this Mafia 2 walkthrough, you’ll be guided through the beginning to ending moments of cutscenes and gameplay for the latest Mafia game in the open-world Mob series on the Xbox 360, PS3 and PC.

Born the son of a poor immigrant, Vito is a beaten down Italian American who is trying to secure his piece of the American Dream. Looking to escape the life of poverty that consumed his childhood, Vito is soon swayed by the lure of power and wealth that a life of Organized Crime can bring.

A petty criminal his whole life, Vito, along with his childhood friend, Joe, will descend into the world of Organized Crime. Together, they will work to prove themselves to the Mob as they try to make their names on the streets of a cold and unforgiving city.

Mafia 2 immerses players in the mob underworld of a fictitious late 1940’s / early 1950’s scenario. The game engages you in a cinematic Hollywood movie experience in a living, breathing city, fusing high octane gunplay with white knuckle driving and an engaging narrative.

Please note that viewers must be at least 18 to watch, so no harm comes to those with innocent eyes.

Starting launch week, these videos will be replaced with Jester’s tips & tricks version. Find the part you need help with by pressing “CTRL” and the “F” keys on your keyboard at the same time to search for the chapter you want help on. Now let’s begin!

Veto returns home from the army and meets up with his old friend Joe.

Meet up with Joe and learn some new lock picking skills.

Steal a car for the first time and make sure you shake the cops off your tail.

Now it’s time to prove yourself and pull of your first job on your own, I would shoot first and ask questions later.

Take Vito down to the old docks to look for a real job to stop mom from complaining.

Sneak in quietly and take out all the guards to steal the gas rations, when the cops arrive sneak out the same way you got in.

It’s a race against the clock as you try sell off those stolen gas rations so use your map and try work out the quickest route possible.

Get ready for some frantic rooftop antics as you evade capture from the heavily armed police, in this robbery gone wrong.

Go round catch up on old war stories and pick up a little something for the boys.

Pick up the Buzzsaw an enormous machine gun and let loose.

Things change when you end up in jail, your going to need some friends in high places to survive.

During your jailhouse brawls some opponents can be really tough use your dodge and counter attack to really teach them a lesson.

Remember you can cycle through your weapons by using the d-pad but don’t try it out in the street in front of people.

With a body in the back of the car and two drunks making a noise take your time driving to your location, use your speed limiter and that way you wont break the limit.

Mafia 2 Walkthrough Chapter 8: “The Wild Ones”

Go on a mission with Joe to help distribute those cartons of ciggaretes.

It’s time for payback now and those Greasers have got to pay.

To trade in stolen cars for cash you can either crush them at the scrap yard or sell them at the docks the choice is yours.

This mission involves some big guns so use cover in order to keep your head attached to your shoulders.

To make sure you are not seen keep an eye on the blue meter it will flash if you have been spotted.

Get Joe and Marty and meet up with your guy on the inside he has some uniforms you can use to gain access to the hotel.

Dont forget to pick up weapons from dead enemies as running out of bullets is the last thing you want.

Go save your pal Joe from drinking himself to death.

Mafia 2 Walkthrough Chapter 11: “A Friend Of Ours”

Take Henry to meet the boss.

This time your sister needs some help with a dead beat husband.

Waking up to a burning house isn’t what Veto had planned somebody will have to pay for this.

Money makes a man do stupid things and diving into the world of drugs, is Vito really prepared?

Remember to always pick up on dropped enemy weapons that you may not have.

This time the chinese gangs have pushed to far, take Joe with you to settle this once and for all.

The dock workers know something about your fathers death.

The mad dash around the city to steal enough cash to pay off those sharks. You can collect money for stolen cars by driving them into the crusher at the scrapyard.

This is the final chapter of Mafia 2. Make your way up to the planetarium and kill Carlo Falcone otherwise you’re a dead man. Prepare yourself first though with a quick visit to the local gun shop.

This concludes the walkthrough guide. Good luck finishing the game!