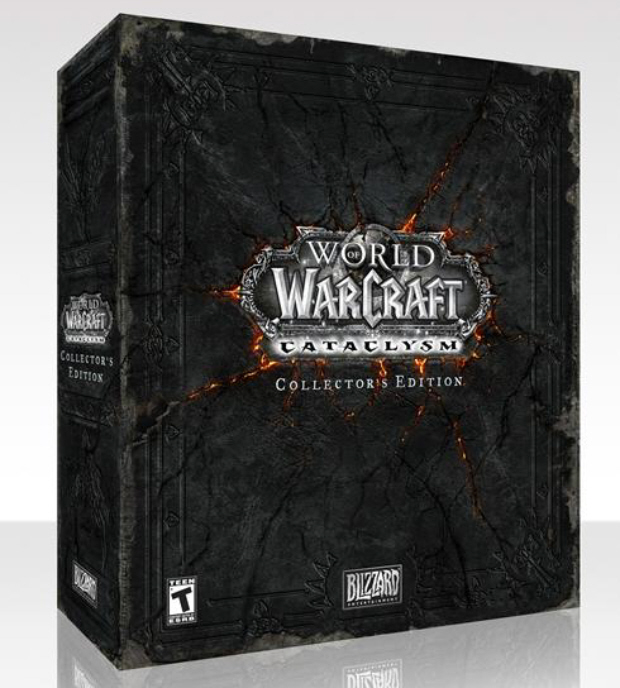 A WoW: Cataclysm special limited edition version has been announced by Activision Blizzard at Gamescon 2010.

As you’d expect, and as Blizzard has done with all of their core World of WarCraft expansions (including Burning Crusade and Wrath of the Lich King), the limited edition will be packaged in a slick exclusive box that’s not unlike those of the Lord of the Rings: Extended Edition DVDs, and will provide a wealth of additional content.

The limited edition will only be available in actual retail stores (which means you’ll have to venture out of the house to get it!) and will cost $80. It will be released for PC (Windows XP/Vista/7) and Mac. The game does not yet have an official release date but is expected this Fall/Holiday.

In addition to the game disc, the World of Warcraft: Cataclysm Limited Edition includes:

* Art of the Cataclysm Art Book – Featuring 176 pages of never-before-seen images from the archives of the Blizzard Entertainment Cinematics Department and the World of Warcraft development team, as well as progressive visuals from multiple stages of development.

* Exclusive In-Game Pet – He may not be a breaker of worlds just yet, but Lil’ Deathwing will still proudly accompany heroes on their struggle to save Azeroth from his much, much larger counterpart.

* Behind-the-Scenes DVD – Includes over an hour of developer interviews and commentaries, as well as a special Warcraft retrospective examining the rich gaming history of the Warcraft universe.

Here is the original announcement trailer for the game.