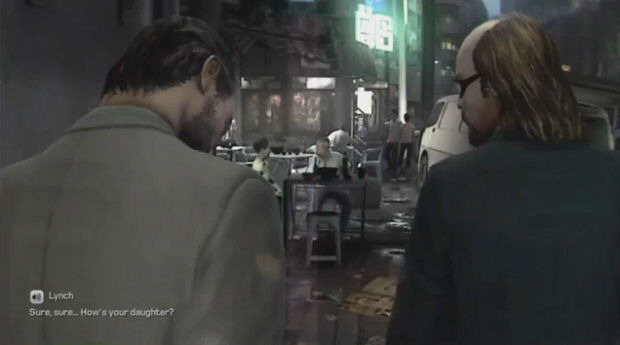 In this Kane & Lynch 2: Dog Days walkthrough, you’ll see the beginning to ending moments of cutscenes and gameplay for this highly anticipated, raw sequel to the original game from Eidos.

After a simple job goes wrong, Kane and Lynch find themselves wanted by the entire Shanghai underworld. Lynch is living the good life as a henchman in Shanghai, where he has settled down with his girlfriend. He’s involved in a big arms deal but needs help to make it happen. Kane is a wanderer, an ex-mercenary with family problems who needs to get away. Despite their differences, Lynch calls him for help. Once together, they set-off a chain of events over two days, as the deal falls apart and Kane and Lynch face the consequences the hard way.

Kane & Lynch 2: Dog Days is a raw and brutal crime shooter designed to take players on an even more intense story experience, following two of gaming’s most disturbed criminals, through the gritty Shanghai underworld. Introducing a new visual experience, Kane & Lynch 2: Dog Days is inspired by documentary filmmakers and the user-generated era. Every aspect of the game has been designed to deliver a fresh perspective to the words ‘intensity’ and ‘realism’ in videogames.

This game is rated M for Mature audiences only. Please be warned you need to be 18 or over to watch this walkthrough on account of all the “Blood, Drug Reference, Intense Violence, Partial Nudity (censored in this guide), and Strong Language.” Chapter 1 starts with torture and someone taking his own life, so don’t tell us we didn’t warn you.

Lynch’s small detour resulted in a blood bath. Brady was prepared and things got out of hand, resulting in the accidental death of Brady’s girlfriend and his own suicide. Baffled, Lynch tries to figure out what to tell his boss Glazer, but leaves it for later. Brady is not important now.

Xiu never turned up at the restaurant and Lynch’s plan to keep low went to hell. The policemen who are in Shangsi’s pocket caught on to them and they are now Shangai’s most wanted. Arriving at Xiu’s apartment block, Lynch is anxious, hoping Xiu is safe. But Kane is skeptical…

Lynch, devastated over Xiu’s death, wants revenge on Shangsi. Kane convinces him that their best chance of survival is to meet with Glazer and get on the boat with the arms cargo leaving the country tonight.

Glazer betrays them to save his own skin, but Kane and Lynch catch up with them. Begging for his life, Glazer tells them he has a private plane, they can leave the country… But he’s shot by Shangsi’s men. Realizing Shangsi is unbeatable they have to find a way out of Shanghai, either by finding Glazer’s plane or another way…

Kane and Lynch 2 walkthrough – Chapter 9 “Bring it Down”

Kane and Lynch 2 walkthrough – Chapter 10 “Kill or Be Killed”

Part 2 continues this chapter to the ending:

Thanks to RolandGamingHD for the walkthrough videos.