The Legend of Zelda: Skyward Sword Tips and Tricks (Wii) 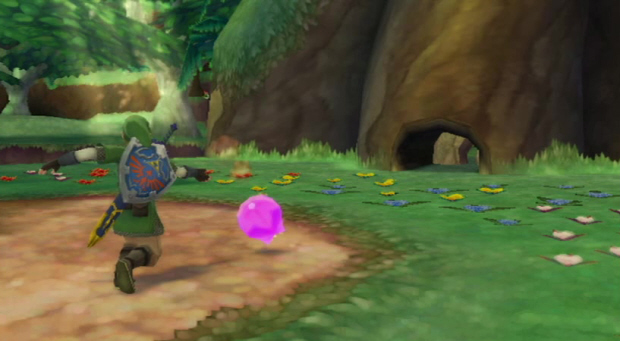 Our Zelda: Skyward Sword tips and tricks page will keep track of new tips for this upcoming Wii-exclusive 2011 Zelda title to give you a leg-up when the game is released.

Even though The Legend of Zelda: Skyward Sword has yet to be released, Nintendo has already put out their own “tips and tricks” video. It’s not much, but it gives you a look into how the game will operate.

Each enemy in the game must be tackled in a different manner. Because Skyward Sword takes advantage of the Wii Motion Plus accessory, Link’s Sword has true one-to-one motion, meaning that how you move the sword in real-life will be exactly reflected in the game. If you raise the Sword upwards, Link will do the same, if you swing the sword a certain direction, Link will follow. The same with the Nunchuck, which corresponds to how your shield is raised. The game takes advantage of this by featuring enemies that must be tackled and attacked by swinging your sword in a certain direction. For example, Deku Baba’s will orient their head either vertically or horizontally. If they are vertical, that means you must slash with your sword vertically to kill them. If they are oriented horizontally, that means you need to swing your sword straight across.

How to Destroy Eyeball Doors

Some doors have eyeballs that can’t be opened unless you confuse the eye. How do you do that? If you watch the eye closely, you’ll notice that the pupil follows your sword’s every movement. Use this to your advantage to confuse the eyeball by moving the Wii Remote around in a circle. The eye will follow and get disoriented. You can then attack it when it’s confused. This will open the door!

How to Catch Items In the Air

One of the new uses for your Bow and Arrow in The Legend of Zelda: Skyward Sword, is the ability to catch items in the air. You can do this by shooting, say a falling heart, with an arrow. This will pierce the heart and stick it into the point where you shot the arrow. Such as into a piece of wood. You can then just go pick it up.

How to Bring Far Away Items To You

One of the new items in Zelda: Skyward Sword is a Mechanical Beetle, which once shot can be controlled using the Wii Remote. Much like the Boomerang in past Zelda games, this Beetle can be used to pick up an item that is far away and can then bring the item back to you. You can also use the Beetle to move an item, by picking it up and dropping it somewhere else.

How to Roll a Bomb (Bomb Roll)

Because Zelda: Skyward Sword features true 1:1 motion with WiiMotion Plus, that means that there are all kinds of new ways to perform with the traditional Zelda elements we all love in new ways. The most obvious example of this is the way you swing your sword. But it isn’t just the Sword that has new means of control. You can now roll a Bomb as if it were a Bowling Ball! This is easily performed exactly as you’d expect. Pull out a Bomb, and then make a gesture with the Wii Remote as if you were rolling a Bowling Ball, just like in Wii Sports! This will cause Link to roll the Bomb along the ground. This can be used to solve puzzles by, for example, rolling the Bomb into a small hole.

How to Perform a Bomb Sneak Attack on Enemies

One tricky way to pull off a sneak attack on unsuspecting enemies is to roll a Bomb like a Bowling Ball near an enemy and then wait for them to approach. When they are close enough, shoot an arrow at the Bomb to make it explode and catch the enemy in the blast!

Here is a trailer for the game showing various gameplay elements like the Bomb Roll.

Learn how to wield your sword like a pro with this video of Nintendo’s biggest Wii game yet, The Legend of Zelda: Skyward Sword. Thanks to the Wii MotionPlus controller, swordfighting makes slashing in all directions more precise. This video shows you how to properly fell the training logs as-if they were enemies from the game.