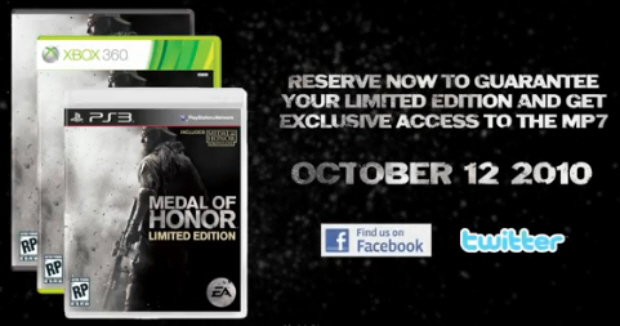 Medal of Honor is getting a Limited Collector’s Edition that will include a remake of Medal of Honor: Frontline for the PS3 version, as revealed at E3 2010.

However new details about what other goodies fans can expect with the limited edition for Xbox 360, PS3 and PC have now been detailed.

The best part of which is the price point. The Limited Edition will cost only $60! This is the typical price of a modern console game and the same price as the standard edition. So you are getting the special edition goodies for free. And free is always good.

The Limited Edition will include the following extras:

* An exclusive MP7 Gun
* Early access to two shotguns (TOZ-194 and 870MC2) which normally require higher ranks to get.
* Access to the upcoming Battlefield 3 Beta next year.

Sure it’s not much, but how can you argue with free, eh?