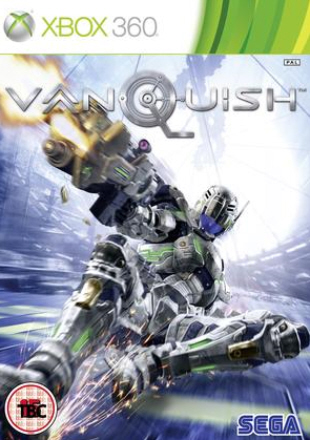 The game is the latest title from PlatinumGames who brought us unique, fast-paced action titles like Bayonetta and MadWorld, only this time their newest game is being designed by Shinji Mikami, creator of Resident Evil.

The story of Vanquish is set in the near future. Russia and the United States are vying for ownership of the world’s fast-depleting energy resources and the US has constructed a space station in order to harness energy from the sun. Russian forces capture this space station and divert its harvested solar energy into a blast wave that destroys San Francisco, aiming to force the US into a total and unconditional surrender. In response, the US tasks its armed forces with recapturing the space station before the Russians can annihilate their next target – New York.

Players take the role of Sam, a government agent who must stop the threat before it is too late. Armed with a special suit and a plethora of weapons, Sam also has an array of martial arts skills that he can use to take down his robot enemies.

Those who pre-order Vanquish from “select stores” will receive the Tri-Weapon Pack upon the game’s release in stores and it will be available via digital download.

The Tri-Weapon pack contains a small arsenal of experimental technology, made up of the Boost Machine Gun, Anti-Armor Pistol and Laser Cannon. This triple threat of futuristic weaponry gives players an edge in surviving the frenetic and massive battles onboard the vast space station setting of VANQUISH. The Boost Machine Gun is an early experimental weapon with impressive overall fire power and the speed to dispense rounds similar to that of a heavy machine gun. The Anti-Armor Pistol fires a special penetrative shell and was manufactured to tackle hostile forces with much stronger armor. Finally, the Laser Cannon is a miniaturized space warship laser and is more powerful than any other weapon available for infantry.

I found the trailer to be severely underwhelming in several areas. Hopefully they can fix up the voice acting and dialogue before release . . .