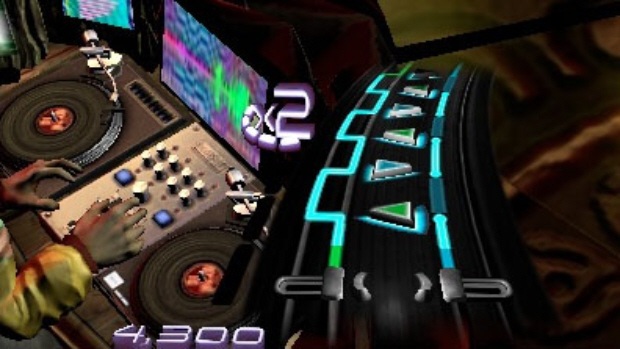 The game is an all new installment in the DJ Hero series and the first to be released for a portable system.

Unlike it’s big console brethren, you do not play this version with a turntable peripheral (naturally, that’d kinda hamper the whole “portable” thing) and instead you use the 3DS lower touch-screen to play.

The game was on-hand and playable at E3 2010 and thus it was revealed how the game is played.

Notes flow down on the highway as usual, and you tap, stroke or scribble the stylus on the lower screen to follow along with the beat of the mash-up song that’s playing. When a ball hits the beat line, you tap. When an arrow comes down you slide either left or right. And you scribble up or down to scratch.

Thankfully, the 3DS has great audio capabilities that allow for much crisper audio and more complex music than what has been seen on any previous Nintendo platform.

Here is an interview with DJ Hero 3D developer Vicarious Visions CEO Karthik Bala regarding his thoughts on the 3DS and a few details on DJ Hero 3D.