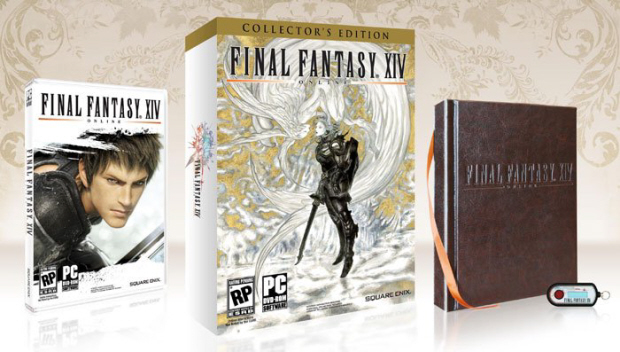 Final Fantasy XIV Online has a release date of September 30th. That’s when you will be able to get the game on the PC, as the PS3 version’s release is still “to be determined”, but will likely still hit this year.

The regular edition of Square Enix’s new MMO (the sequel to Final Fantasy XI, essentially) will cost RPG fans $50 whereas the Collector’s Edition will retail for $75 and will arrive a week early on September 22, 2010!

Here is what will come with the Final Fantasy XIV – Collector’s Edition.

In the world of Hydaelyn, the term Eorzea denotes the geographical region comprised of the
continent of Aldenard and its surrounding islands,
as well as the civilization which spawned there.
Calling the area home are several independent city-states,
the most notable being Limsa Lominsa, bustling port and pirate hub;
Ul’dah, a desert city rich in mineral wealth;
Gridania, nested deep within an ageless wood; and Ishgard, bastion atop the mountains.

Throughout the realm can be found climates both harsh and mild, as diverse as the skies are vast.
Bleak, desolate landscapes stretch to uncharted horizons,
their uninviting expanses yet to be traversed.
Colossal monstrosities stalk the land,
as if mountains primeval had somehow stirred and risen.
Of all the things Eorzea may be said to be, hospitable is not among them.

In the past, the city-states battled tirelessly, vying for domination and hegemony.
Death-mongering beast tribes molested the land unchecked, leaving only destruction in their wake.
Unseen enemies lurked beyond the borders,
striking at the slightest provocation or show of weakness.
The history of Eorzea is a tapestry woven of war and strife,
stained with the blood of those gone before, and the tears and ash of fallen endeavor.

And yet the love the gods bear this unforgiving land endures, now as always.
What is the allure of this seemingly forsaken place?
With what hope and to what end do would-be inhabitants journey here to live out their days?

The answer lies with that which gives form to Hydaelyn and all myriad creation in it—crystals.
The cornerstone of all things,
it is these crystallized manifestations of the aether that beckon the people to come,
risking all in the undertaking.

And so it is that adventurers too have harkened the call—to bear witness
to the epic set to unfold in this land. This Eorzea.