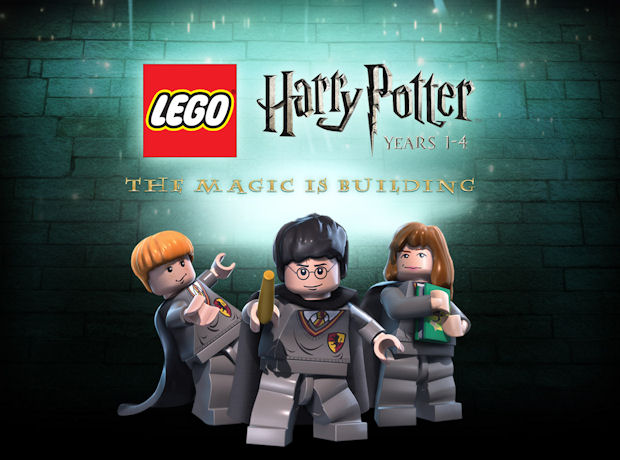 In this Lego Harry Potter: Years 1-4 walkthrough, you’ll see the beginning and ending moments of cutscenes and gameplay for this newest action-adventure game in the Lego series from Warner Bros. based on the first four Harry Potter books & movies. This guide covers the Wii, Xbox 360, PS3, PC & PSP versions.

The game tells the story of Harry’s first four years at Hogwarts School of Witchcraft and Wizardry, Lego Harry Potter: Years 1-4 brings a mix of magical gameplay and light-hearted humour. Playing as Harry Potter, Ron Weasley and Hermione Granger, as well as other favourite characters, you’ll have the opportunity to attend lessons, cast spells, mix potions, fly on broomsticks and complete tasks to earn house points. Throughout the game, you’ll also have the freedom to explore iconic settings from the wizarding world including Hogwarts castle, Diagon Alley (these first two are the game’s hub), the Forbidden Forest and the village of Hogsmeade!

As commentator Jester says, the format for this walkthrough is going through the game level by level. Each level or lesson is named after its Leaky Cauldron notice board’s black-and-white photo, so it’s easy to find the level you need help with or to search for the level you’re stuck on. Let’s begin! 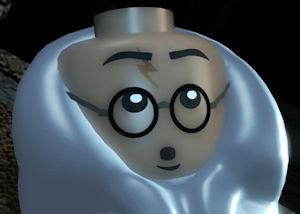 Level 1 of Year 1’s “Harry Potter and the Philosopher’s Stone (Sorcerer’s Stone in the U.S.)” is a quick introduction to the game.

General play tip for when you’ve lost your way: If you are lost in game try following the trail of Ghost Studs. These do not count towards your stud total, but will guide you to the next section of the level.

General play tip for finding new characters: Most people will only be able to unlock minor characters like Oliver Wood and Hannah Abbott on their first playthrough. For unlocking the remaining playable characters in Story Mode, we recommend replaying levels in Freeplay Mode after you finished the game. You’ll still have to buy them, but you need to collect the icon/crest on a level first before you can. So that’s why we’ve added as many unlockable character tips to this walkthrough as we could to try and help you find them all!

How to open Harry’s Vault: You will need to use Hagrid to pull the heavy lever next to the fire breathing dragon. Doing this will allow the Goblin to gain access to the Vault. Only strong characters can pull levers and later Harry will learn to make a Strength Potion that will allow him to do this on his own.

After entering train platform 9 3/4th, in Part 2 of Year 1 you are welcomed to Hogwarts.

To unlock the Golden Brick: In the bedroom you must destroy all four of the beds by aiming your magic at them. After you have destroyed all the beds a golden brick will appear floating above one of them. Use the bed to bounce high enough to grab it.

To unlock the Gryffindor Boy character: Look behind the sofa he is sleeping on. 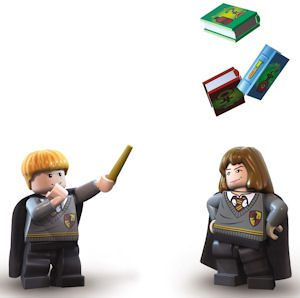 In Part 3 of Year 1 you learn the Wingardium Leviosa Levitation Charm. Its purpose is to make objects hover in midair and in the game it helps you build objects.

General play tip on how to activate funny interactions: Use your new magic spells on as many different objects as possible to discover new and interesting interactions and comedy moments.

How to save all Gryffindor Boys: On the first two Gryffindor Boys use your spell once to save them. The third Gryffindor Boy that needs to be saved in the Wingardium Leviosa Lesson is the trickiest, as you will need to piece together a suit of armour using your new spell. These pieces will only fit together in the following order: Torso, Helmet and then finally the Spear.

Lego Harry Potter Walkthrough Year 1, Level 2: Out of the Dungeon 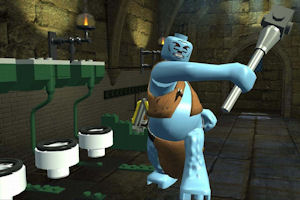 In Level 2 of Year 1 you fight the Ogre / Troll in the toilets.

To continue down the first corridor you must swap characters to play as Ron and then use Scabbers the rat to press the switch’s inside the tubes this will stop the poison gas from blocking your path.

How to gain access to the girls bathroom: You need to look like a girl, to do this use your magic on the magicians portrait and he will look through his wardrobe and find you something suitably female to confuse the security guard painting. Quickly run up to the guard and you’ll be let inside the womens toilets.

How to defeat the Ogre in the Bathroom: Use wingardium Leviosa to throw objects at him. Be sure when locking onto the bricks he throws when you see the purple ring around it, that you’re using Wingardium Leviosa’s special button (and not the other normal attack). After you have depleted two of his hearts he will drop his club, you must use this club to deliver the final knockout blow to his head. 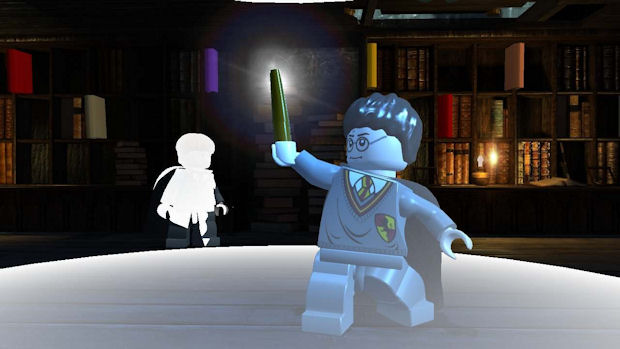 In this part of Year 1 you learn the Lumos Light Charm. Its purpose is to make the tip of the caster’s wand to light up the space the spell caster is in.

To unlock all five of the star pieces: You will need to use Lumos on all the enchanted items that have a star piece in their possession.

In the Herb Lesson of Year 1 you’ll be using your Lumos Charm again to solve a puzzle.

During the herbology lesson Ron gets grabbed by a huge plant. People are getting stuck on this section a lot! The solution: Use your new powered-up Lumos spell (AKA the green spell) on the plants, until you get a little trolley to build. Build it, jump on it and ride it as a rolling battering ram to smash through the brown plant. Then all you’ve got left to do is use Lumos on the rest of the plants and on Ron to free him of course. — Figuring this out now prevents you from getting stuck later on in the game, because Devil’s Snare becomes a new barrier type.

In Level 3 of Year 1, Ron and Hermione must help Harry in this Quidditch match level.
Protip: Finish the level within 5 minutes to get the Quick Quidditch achievement/trophy.

This is Level 4 of Year 1. At the begining of the level there is a student trapped by Devil snare inside the trunk of the tree. Rescue him using your Lumos Solem spell (white spell) for extra bonus studs at the end of the level.

What do you do at the Forbidden Library with the invisibility cloak? If you can’t find the third potion ingredient, which is blue and looks like an ice lolly, the answer is: To get the blue ice lolly ingredient use the stand on the yellow book and your co-op buddy will levitate you upwards. Now jump up onto the left hand ledge and break the ice wall between the two bookcases. This wil reveal the secret area with the lolly.

All potion ingredients recap: (watch the video for more details)
2. There are two giant wizard-like statues, by using Wingardium Leviosa you make the hands lift up. Stand on it and the computer or the person you are playing with will lift them up. Burst through the wall on one side (the one without the plants) to get the first one which is some blue thing.
2. Then smash the plants on the other side to get the second one, which is a bunch of flowers.
3. Then on that same side (with the plants) there is a book shelf. Hit this and it falls over revealing the third ingredient, which I think is a spider. — Thanks for the tips H.P.

This is Level 5 of Year 1. If you happen to be caught whilst sneaking around, switch to your second character and aim your magic at the cat! Cruel? Yes, but this will ensure you can make a clean getaway and you won’t lose any items that you may be holding.

Tip: There is also a safe located in this level that can only be unlocked by one of the Gringotts Bank gnomes. Keep that in mind for your return during freeplay.

In Level 6 of Year 1 you’ll be playing a board game and doing a “final” boss fight.

How to solve the chessboard at the end of Year 1: On the human sized chessboard puzzle you must shoot a couple of chess pieces to get them moving. Then go for the Rook and Knights, and like in the movie you gotta ride as well.

How to beat the final boss of Year 1: In the final boss fight against Lord Voldemort, he’ll be shooting flames at you, but once in a while a Lego head comes out at you. Send the Lego back to him to stun him, then jump over to him and have Harry hit him to beat him.