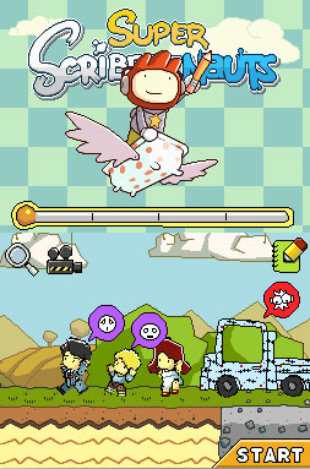 Created and developed by 5TH Cell and available this October 2010, Super Scribblenauts will include 120 brand new levels, hundreds of new objects in a robust dictionary and an adjective system with thousands of new adjective words. The new E3 trailer highlights some of the shiny new adjectives available in the game like zombified, telekinetic, narcoleptic and gentlemanly.

Players must use the stylus and touch screen along with their imagination to help Maxwell, the game’s hero, solve robust puzzles and challenges in redesigned levels to acquire the “Starite.”

In Super Scribblenauts, players now have the ability to write any object that comes to mind and modify it in any way they desire, using adjectives to reach the goal in each level. Adjectives can change the color, size, elements, behaviors and many other aspects of the object they are describing. Multiple adjectives can be combined together to produce incredibly creative objects, allowing the player’s imagination to run wild for a truly unique and individualistic experience.

* Brand New Levels: Experience 120 brand new, in-depth levels that include task such as finding a cure for the plague, populating an office or identifying animals with shells.
* All-New Adjectives System: Create a shy green polar bear or an angry zombie pear! 10,000+ adjectives reflect real life behaviors, personalities and characteristics when applied to objects.
* Multi Layered Hints: Just can’t figure that puzzle out? Purchase more explicit hints at a decreasing Ollar cost over time.
* Universal Feedback System: Visualize progress throughout each level! Relevant objects summoned get a thumb up, while irrelevant objects get a thumb down.
* Updated Dictionary: Summon more than 800 all-new, customizable objects to solve puzzles and earn Starites.
* New Control Schemes: Control Maxwell with the D-pad or with updated and more precise new Stylus controls! Weight, buoyancy, friction have all been reworked to make objects interact better to the player’s input and reflect any adjective that is applied to an object.
* New Level Editor: Create both puzzle and action levels to build your very own custom playground. The unique new template system allows players to create all kinds of objectives for their levels with ease.
* Innovative UI: An exciting new UI gives players more control over gameplay, with more detail on how to navigate through new levels in the game.