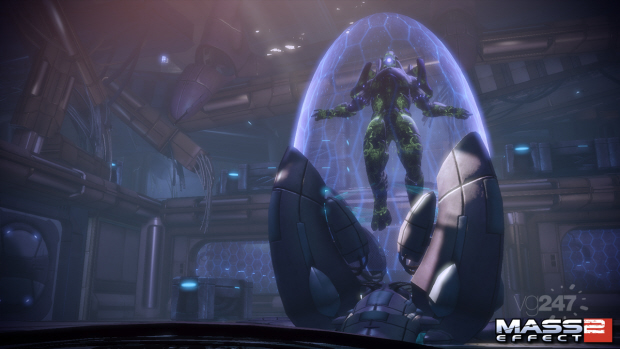 In this Mass Effect 2: Overlord DLC walkthrough, you’ll see the beginning to ending moments of cutscenes and gameplay for this third piece of downloadable content for the hit space RPG.

In Overlord, players fight against an evil AI enemy through a laboratory in an adventure that is set across five levels on one planet. Unlike before, no party members will be added in this pack.

There are four areas to Overlord. Here is the first. The next three will be the Vulcan, Prometheus and Atlas Station. This downloadable content adds around an hour or a little more to the game.

Basically the objective to do here is: to get to the satellite dish and destroy it. You will come across a few enemies here and there on your way to the dish. You should already be familiar enough with the game but just make sure to use your team’s abilities and change your weapon often depending on the enemy you are facing.

The next and last part to this area of Overlord will be when you are at the satellite dish.

This is the last part to the first area of Overlord.

You are now almost to the satellite dish. Once you arrive there, your objective is to first expose the capacitors around the dish and then shoot them to blow them up, which in the end destroys the dish. You will face enemies while on top of the dish as well, so make sure to use the cover system as well as your teammates. This should not be new to you by now.

You will be using the M-44 Hammerhead here and there during Vulcan Station. You may or may not be familiar with this vehicle. When you come across Lava Rivers, use its boost to get across these rivers. Also when coming across yellow circles, hold the Y button. This will collect data and earn you the “Data Hound” Achievement for 10 Gamerscore.

Your objective here is: to get to the station and override the lockdown. Remember to use your team’s abilities and change your weapon often depending on the enemy you are facing. Also remember to use the cover system.

This is the last part to Prometheus Station; there will be a good amount of enemies to kill.

Your objective here is to now shutdown the rogue VI.

This area is the final part to Overlord, a quarter of the way through you will be split from your team. Afterwards, you will be on your own for the rest of the mission, so be prepared and use cover.

The next part will be the ending of Overlord: Atlas Station and where you have to stop the VI Core from uploading while battling enemies.

You will have to stop the VI Core from uploading while battling enemies. This is actually pretty simple; just make sure to pay attention to the progress bar when you are battling the enemies. When this is happening, just quickly shoot the VI connections to stop it. Afterwards a cutscene will take over, leading to the ending, feel free to make your own decisions. You do not have to make the choices I do at the end during the cutscene.

I hope the walkthrough videos helped.

Thanks to TheGamesHD for the walkthrough videos.