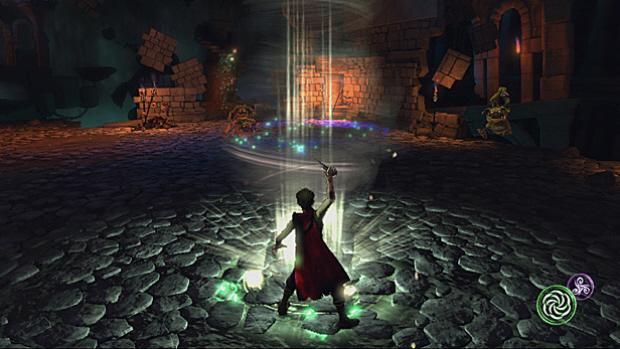 Sorcery is a PS3 Move action adventure game that was announced and demoed for the first time at Sony’s E3 2010 Press Conference.

The game is essentially like Harry Potter come to life, where you play a sorcerer’s apprentice who casts spells by using a Magic Wand. The player must control the wand with the Move controller in your hand and “shoot” the spells by swinging at the screen.

You can use various elemental spells like Electricity or Fire to damage enemies. And you can manipulate these spells and change how they are executed by how you wave your wand. For example, if you swing the Move Controller at your feet with Fire, you can create a Fire Wall attack. And one Wind Attack had you swinging the Move over your head to cast the spell.

An even cooler use of these kind of motions is when you have to “shake a potion bottle” and then raise it to your mouth to drink it! Very awesome.

As you progress you’ll get more powerful area of effect spells that are tougher to conjure and take more magic energy. Since this is an action adventure title, you’ll also be making your way through various environments and will solve puzzles using your spells. At the end of the demo a broken bridge is repaired with a powerful “Mend” spell just before fighting a Troll boss.

Here is a video of the game’s debut. I must say that this game looks extremely fun. Can’t wait to try it out myself.