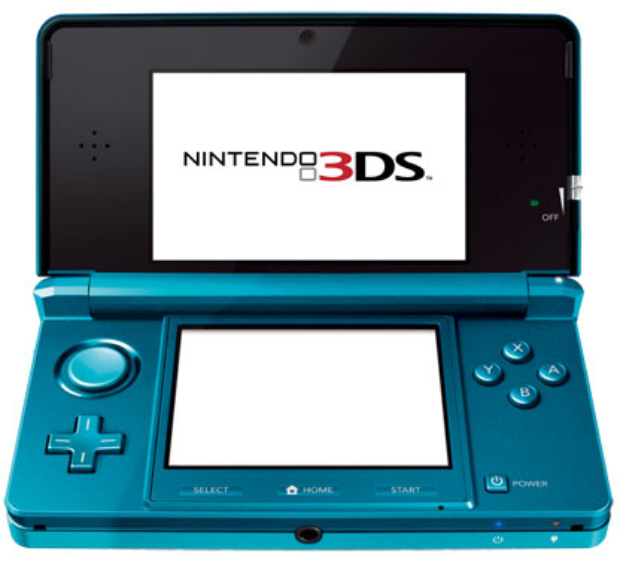 The 3DS was officially unveiled by Nintendo at their E3 2010 Press Conference as they dropped their megaton on a suspecting audience.

However what exactly was unveiled was quite unexpected, as everyone pretty much though that Nintendo would AT LEAST change the look of the successor to the DS. That didn’t happen though, for better or for worse, as the system mirrors the exact design of the previous DS systems. Clamshell with two screens. But what REALLY matters is what you already know . . . . THE THIRD DIMENSION.

The Nintendo 3DS supports some incredible features. Undoubtedly the biggest is the fact that the top screen of the system offers you 3D graphics (yep, just like in movie theaters) WITHOUT having to wear 3D glasses.

Other 3DS features unveiled are:

* In addition to all the same buttons as DSi: X, Y, B, A, R, L, Select, Start, Home, Power and the D-Pad, the 3DS adds a “Slide Pad” which allows for 360-degree analog input! It works just like an analog stick.
* A motion sensor and a gyro sensor are built into the system, meaning you can control things by motion!
* The system is graphically as powerful or more so than the Wii. With some games looking like Xbox 360 titles!
* The bottom screen is a normal touch-screen just like on the DSi.
* A microphone is also included just like the previous DS systems.
* Also like the DSi, the system has cameras on it. Not 1. Not 2. But this time THREE cameras. 1 on the inside hinge that faces towards you. And TWO on the outside of the system facing AWAY from you. Why two cameras? . . .
* The system is fully backwards compatible with all DS and DSi games.
* THREE-D DIGITAL PHOTOGRAPHS are now possible! The 3DS becomes the first device ever to allow you to take and view photos in 3D. That is why there are two cameras, as it makes this possible. No word on if the system can take video . . . I hope so but something tells me no.
* The system has a slider that allows you to adjust or completely turn off the 3D effect of the top screen. You can also set it anywhere in between.
* The system retains the SD Card Slot.
* The top screen is a bit wider than the bottom screen for a more “cinematic” effect.
* The 3DS CAN PLAY Hollywood films in 3D! Three titles were announced: How to Train Your Dragon 3D, Legend of the Guardians and Disney’s Tangled. No that is not a typo. 3D movies on your 3DS! This will make the 3DS the first portable device to allow for 3D movie watching/downloading. But exactly how it all will work wasn’t unveiled . . . other than the fact that you CAN watch movies on the device.
* Like the Wii, the 3DS has built-in automatic Wi-Fi technology that seeks out an Internet connection (like the Wii Connect 24) or another 3DS in order to download information even while in Sleep Mode. Nintendo says this can give you new downloads while you sleep or exchange downloads with a friend/stranger if you simply pass them by. And unlike before, new info can be downloaded even if the other person is playing another game. As it is automatic and all happens behind the scenes.
* The 3DS WILL have an Internet browser so it’s presumed that Apps and a menu system similar to the DSi are supported.

But then you come to what is NOT KNOWN about the system. And the list is quite extensive. No online support was discussed. Will there be a 3DS Shop like the “DSiWare” and “WiiWare”? Where is the announcement of a DS equivalent of the Virtual Console for classic Game Boy/Game Boy Advance downloads? A oft-requested feature.

Will my DSiWare carry over (this is likely a no since it didn’t carry over even from DSi to DSi XL since the DSiWare is tied to the system)? If not will there be a way to transfer it using the SD Card Slot? What does the system menu look like? Can you download Apps? Will these features be expanded? Will there be a better/expanded music player? Will all file-types and video playback from an SD card now be possible? Can it interface wirelessly with the Wii? How will movie-playback work? Will there be a shop to purchase movies? Will movies be downloadable and saved to an SD Card Slot, or will you sell them on Game Cards like with the Game Boy Advance “movies” (let’s hope not). And possibly most importantly at all, when will the system be released and what’s the price point?

We’ll have to wait for answers to these burning questions. If we find out the answer we will update this article. Until then . . . how excited are YOU about the 3DS? Don’t forget to check out this giant list of 3DS first and third-party games.

Here is a quick look at the system hands-on.

And here is the 3DS unveiling in video form:

Last but not least, here are the official specs as supplied by Nintendo:

Nintendo changed the world of video games with touch-screen gaming on the Nintendo DS in 2004. Nintendo then pioneered the motion-controlled gaming revolution with the Wii console and the Wii Remote controller back in 2006. Today the company unveils an even more immersive gaming experience: Nintendo 3DS.

Size (when closed):
Approximately 5.3 inches wide, 2.9 inches long, 0.8 inches tall.
Weight:
Approximately 8 ounces.
Look:
Final design is TBA.
Top Screen:
3.53-inch widescreen LCD display, enabling 3D view without the need for special glasses; with 800×240 pixel resolution (400 pixels are allocated for each eye to enable 3D viewing).
Touch Screen:
3.02-inch LCD with 320×240 pixel resolution with a touch screen.
Cameras:
One inner camera and two outer cameras with 640×480 (0.3 Mega) pixel resolution.
Pre-Installed Software:
TBA
Nintendo 3DS Game Card:
2 GB Max. at launch.
Wireless Communication:
Can communicate in the 2.4 GHz band. Multiple Nintendo 3DS systems can connect via a local wireless connection to let users communicate or enjoy competitive game play. Systems also can connect to LAN access points to access the Internet and allow people to enjoy games with others. Will support IEEE 802.11 with enhanced security (WPA/WPA2). Nintendo 3DS hardware is designed so that even when not in use, it can automatically exchange data with other Nintendo 3DS systems or receive data via the Internet while in sleep mode.

Other Input Controls:
3D Depth Slider to adjust level of 3D effect (can be scaled back or turned off completely depending on the preference of the user), Home button to call system function, Wireless switch to turn off wireless communications (even during game play), Power button. The telescoping stylus is approximately 4 inches when fully extended.

Input/Output:
A port that accepts both Nintendo 3DS game cards and game cards for the Nintendo DS™ family of systems, an SD memory card slot, an AC adapter connector, a charging cradle terminal and a stereo headphone output jack.

Sound:
Stereo speakers positioned to the left and right of the top screen.

Parental Controls:
Parental controls similar to the Nintendo DSi system will be included.