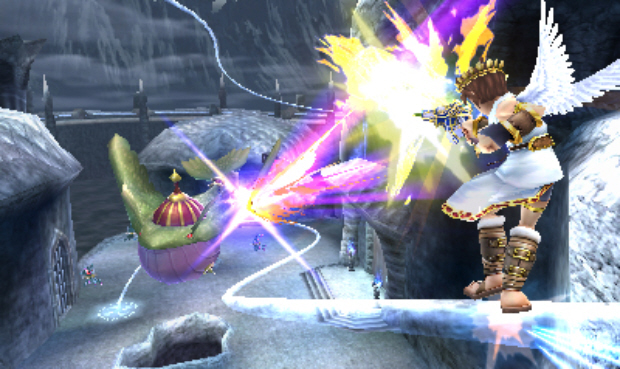 Kid Icarus: Uprising for 3DS was announced at Nintendo’s E3 2010 Press Conference and is one of the biggest surprises of the show.

One of the most longed-for franchises from Nintendo’s long history makes its glorious return in spectacular 3-D. Kid Icarus is back in a new game designed specifically for the Nintendo 3DS system by Kirby and Super Smash Bros. creator Masahiro Sakurai and his development team at Project Sora.

Kudos to Nintendo for reviving Pit! After his modern debut in Super Smash Bros. Brawl, I think everyone was hoping that he wouldn’t be ignored. And this new game looks fast, furious, and a heck of a lot of fun. Especially the way the game combines areal and ground combat and navigation.

Key features include:
* Kid Icarus: Uprising is a fast-paced and action-packed blend of aerial and ground-based shooting built on elegantly intuitive and streamlined play control. Boasting game play that is easy to pick up but incredibly deep, the game is sure to satisfy novice gamers as well as fans who have been clamoring for a new installment in the franchise.
* The hero, Pit, teams up with Palutena, the goddess of light, who bestows on him the miracle of flight for limited stretches. With this gift, Pit soars through skies, shooting down swarms of enemies along the way, before finally setting down and engaging in frantic ground-based battles against Medusa’s underworld army.
* Kid Icarus was originally released for the Nintendo Entertainment System in 1987, and gamers have been clamoring for a new game in the series for years. Kid Icarus: Uprising is the first installment in 20 years and brings the popular Pit character to life in an action-packed game.