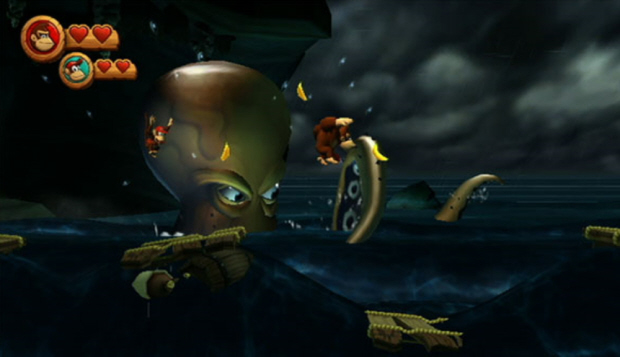 If you’ve never played the original game for which this one is “returning” from, then by all means please give my Donkey Kong Country review a read!

Back? Good. Amazing stuff, eh? “They don’t make games like THAT anymore!” you say. WRONG. Nintendo has literally thrown a monkey wrench into their line-up with Donkey Kong Country Returns, a game that absolutely NO ONE saw coming nor expected.

As you can tell from the screenshot above and the video below, this game is effectively a remake of Rare’s 16-bit Super NES classic. Just like that game, this one is a side-scroller in which you take control of Donkey Kong and his lil’ buddy Diddy Kong who set out on a quest to save Donkey’s Banana Horde! And both Donkey and Diddy look just like you remember them. That is, more in the style of the original game than say Donkey Kong: Jungle Beat. DK comes complete with necktie and Diddy even has his red cap!

You then traverse the stages collecting bananas, bouncing or rolling through enemies, facing against giant bosses, navigating dangers, riding mine-carts through dank caves with perilous jumps and presumably riding animal buddies. They even add elements taken from Donkey Kong 64 and other Donkey Kong games, such as Diddy Kong’s jetpack! And I couldn’t be happier! Sweetening the pot even more is the fact that Nintendo has tapped Retro Studios, the folks who made Metroid Prime, with this retro update!

Here is the E3 2010 trailer for Donkey Kong Country Returns.

Here is the official synopsis:

Controlled by a group of evil Tikis, the animals in Donkey Kong Island have raided Donkey Kong’s Banana Hoard and stolen his stash of bananas – and he understandably wants them back. Retro Studios brings Donkey Kong back in a new side-scrolling adventure with familiar characters and new levels that reignite the passion players had for the Super NES original.

* Retro Studios faithfully restores everything that made the original series great, from barrel cannons to mine carts, and then builds on those elements with stunning graphics and new layers of depth to the world and game play. The game offers the traditional side-scrolling experience everyone loved, but with levels created in fully rendered 3-D environments.
* Diddy Kong joins the quest. With his trusty backpack, he can produce a jet pack or Peanut Pop Guns to give Donkey Kong more abilities.
* For the first time ever, the franchise features the ability for two people to play together at the same time (additional accessories required and are sold separately) – one as Donkey Kong, one as Diddy Kong. Players can navigate the levels separately or as one unit. Diddy Kong can ride on Donkey Kong’s back and hop off whenever he pleases, allowing novice players to ride on Donkey Kong’s back through more challenging areas of the game.
* Hidden items, puzzle pieces and other surprises are found all through the jungle. Spell out K-O-N-G by the end of each level to earn an extra bonus.
* Motion controls give players a real feeling of control. Players move Donkey Kong by using the Control Stick on the Nunchuk controller and can shake the Wii Remote controller to make Donkey Kong slap the ground.
* Vibrant colors, beautiful graphics and fun characters draw players in. Even people who have never played a Donkey Kong game before can pick up a controller and start collecting loads of bananas.
* Every level offers new fun and new challenges. Sometimes Donkey Kong is running through the jungle, sometimes his action takes place on a tropical beach and other times he must become a master of timing as he jumps chasms in a mine cart.

The only other thing I could hope for is that Nintendo adds online co-op play. COME ON NINTENDO! YOU CAN DOOOO IT!