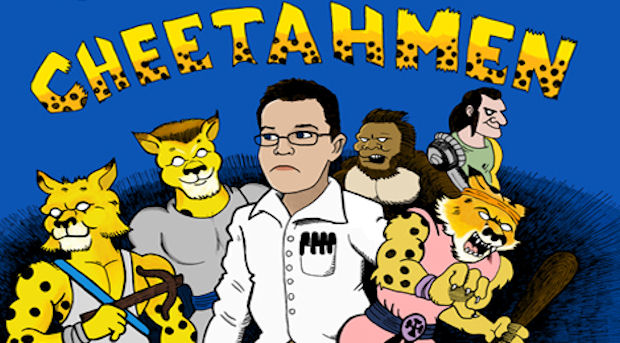 This is the 91st in a series of reviews of bad video games by the Angry Video Game Nerd. Watch as the Angry Nerd reviews the unlicensed NES videogames from 1991 & 1993 by Active Enterprises called Cheetahmen & Cheetahmen II.

Description: “Dr. Morbis is at it again! In CHEETAHMEN II, Dr. Morbis seeks to destroy the Cheetahmen with all new traps and dangers! Beware, the even more dangerous sub-humans. This time CYGORE and Dr. Morbis are getting in to it! See if you can get the Cheetahmen through the jungles and to Dr. Morbis’s secret laboratory, but beware of the many traps along the way. Then, when you finally think you’ve gotten through, you will have to do battle as only the Cheetahmen can! APOLLO will have to fight Dr. Morbis, ARIES battles Cygore, and HERCULES goes head-to-head with the newest sub-human… the MAN-APE!”

The Nerd examines the final game from Action 52’s lineup: Cheetahmen and then dives into the rare Cheetahmen II.