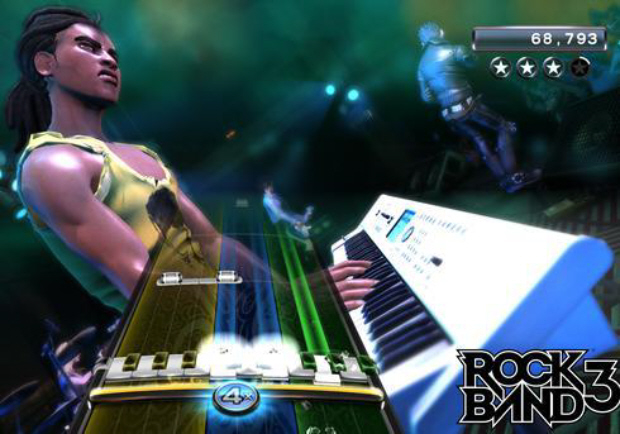 Rock Band 3 details have emerged and it’s set to launch the music genre into overdrive and possibly revitalize a genre that has gone somewhat stagnant due to too much oversaturation.

First up, the game will have a whole new set of instruments, including Keyboard (for the first time in any modern music game) for users to purchase if they want to partake in what is known as the “Pro Modes”. These are an advanced tier of play and the instruments are literally as close to real instruments as you can get. 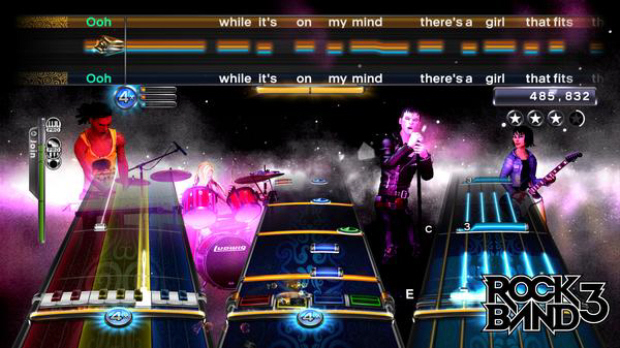 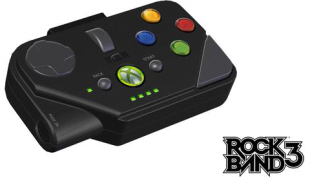 To that end, the game will include support for a MIDI box that allows you to hook up actual real MIDI drums or keyboards to the game and play it using them.

Alternatively, the new “Pro” pro guitar resembles a full-sized real guitar with actual strings included. And this means that the gameplay itself has been updated so that it more closely resembles actual guitar playing (you still have the buttons to press at the neck). All the peripherals are being made by Mad Catz. 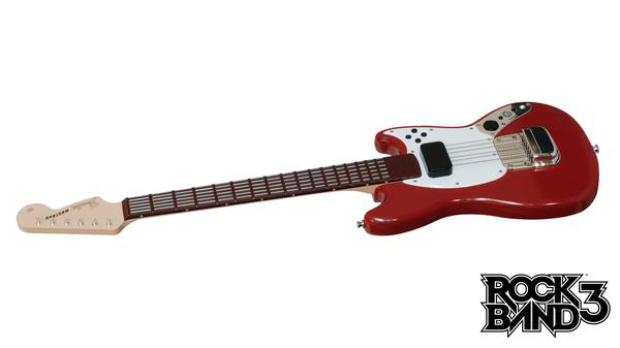 MTV has also announced a deal with Fender to produce a real, amp-ready guitar that also doubles as a pro mode guitar controller. The “Fender Mustang PRO-Guitar Controller” is a full-sized guitar.

Then you have the Keyboard. This controller has you playing using five keys on the default setting, starting with C in the middle. Naturally, having keyboard included really opens up the game to a whole new style of music than what has been available previously. And many of the new songs included have piano or synth parts. If a song doesn’t have keyboard parts, you can use the keyboard to play guitar parts, and vice versa. As you increase in difficulty you’ll use more keys, and will be using the full range (or near to it) in Pro Mode, as the Keyboard covers a full two octaves. For those who have too much trouble with the Keyboard, you can also play Keyboard parts with guitar or bass.

In addition, the Keyboard doubles as a “Keytar” with a short neck, effects strap, and pegs for attaching the strap so you can hang it around yourself. The Keyboard also includes a MIDI out port. 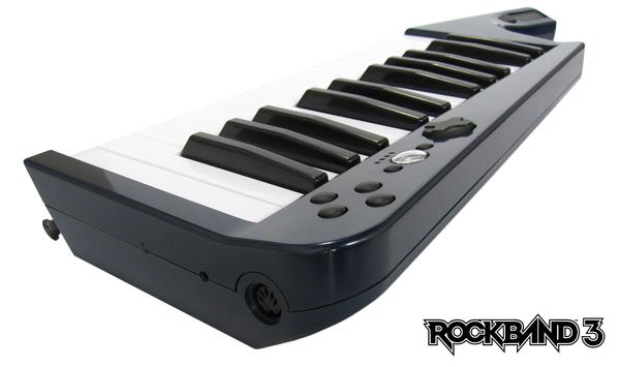 Drums meanwhile will include both high sections (that use the cymbal pieces) and lower sections.

Here is a list of other new features/aspects you can expect to see in Rock Band 3:

Pro mode is the term the developers are using to differentiate a new upper tier of gameplay in Rock Band 3. It’s designed to be more realistic and, by design, it ends up being a lot harder than what you’re probably used to. When you enable it on the keyboard, the display changes to show more keys, forcing you to essentially play accurate keyboard parts on its highest setting. The keyboard will be available on its own for $79.99, or in a bundle with the game for $129.99.

Vocals get optional three-part harmonies, like Beatles and Green Day had, and by default, the drums in Rock Band 3 are unchanged. But remember those cymbal attachments that were sold alongside previous Rock Band kits? In the drummer’s take on pro mode, some gems go between their regular style and tiny cymbals. This tells you when you’ll hit the pads down below and when you’ll go up top to hit one of your three cymbals. Interestingly, the expanded drum parts are backwards compatible, so much of the existing Rock Band DLC and on-disc tracks from the previous games will automatically feature the proper pro drum data. The cymbals on the Ion Drum Rocker will also work for pro drums.

* Vocals will have optional harmonies ala The Beatles: Rock Band. Drums are essentially unchanged outside of what’s mentioned above (Cymbals used in Pro Mode).
* The expanded drum sections are backwards compatible with existing Rock Band DLC and on-disc tracks.
* Songs released after Rock Band 3 however will not be compatible with previous Rock Band games.
* Previously bought DLC WILL be completely compatible with Rock Band 3.
* The Pro Mode stuff can be completely skipped if you want, and Harmonix has focused on making the game easier to get into than ever before.
* You can now practice short sections of songs in the Training Mode and even play them much slower until you master each part.
* The front-end has been completely reworked with ease of use in mind. Now all players can change options and browse songs independent of each other thanks to pop-out, per-player menus. So if one person presses a button it doesn’t effect what the others are doing.
* The game has graphically been updated and looks a lot nicer and slicker overall.
* A new Challenge Mode has over 700 accomplishments to master and earn!
* Custom playlists can be created and saved. This allows you to easily access them. You can even challenge friends to leaderboard battles using your playlists.
* Many of the social, multiplayer, online and competitive parts of the game will include social networking intergration with the likes of Facebook and Twitter!
* The set-list will include a whopping 83 songs!
* Older tracks played in Rock Band 3 will, obviously, not be upgraded for the new Pro Mode and peripherals like keyboard. But they will still work.
* The game will be released on Xbox 360, PS3 and Wii this year. It will be available standalone or bundled with the Keyboard Peripheral.

Here is a look at the game in action.

Here is some information, including pricing, on the new controller instruments.

To be formally announced in due course, Mad Catz will be offering updated versions of the guitar and drum peripherals from prior versions of Rock Band, as well as improved microphones in support of the Rock Band 3 vocal harmony feature.

Featuring an incredible 83-song setlist and access to far more music than any other music video game, as well as innovative new gameplay modes and instruments, Rock Band 3 will change the way fans think about and play music games. This next iteration in the Rock Band platform has something new for everyone and also supports traditional Rock Band gameplay with players’ existing instruments. Developed by Harmonix, the world’s premier music videogame company, published by MTV Games, and distributed by distribution partner Electronic Arts Inc. (NASDAQ: ERTS), Rock Band 3 will ship simultaneously worldwide this Holiday 2010 in North America, Europe, Australia, New Zealand and other territories for the Xbox 360® video game and entertainment system from Microsoft, PlayStation®3 computer entertainment system, Wii™ home videogame console from Nintendo, and Nintendo DS. Rock Band 3 will be compatible with all Rock Band and The Beatles: Rock Band peripherals, as well as most third-party instrument and microphone controllers. Mad Catz is the official peripheral manufacturer and distributor for Rock Band 3 game controllers.