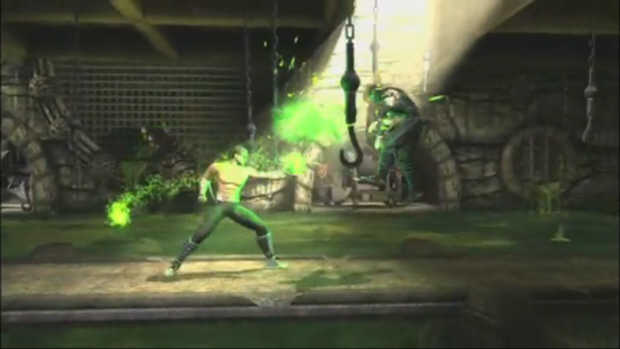 The all-new Mortal Kombat 9 returns the series to 2D! Actually, this newest title, which is the 9th entry in the long-running violent fighting series, is completely 3D but on a side-scrolling 2D plane ala Street Fighter 4!

This is exactly what fans have been asking for and craving for ever since the franchise started abandoning fans as it went into the 3rd dimension with Mortal Kombat 4. The classic formula that players loved was even further abandoned during the last generation as MK went in every direction BUT the one that fans wanted to see, with 2002’s Mortal Kombat: Deadly Alliance, 2004’s Mortal Kombat: Deception and 2006’s Mortal Kombat: Armageddon.

While they weren’t horrible games by any means (and were packed to the gills with “non-Mortal Kombat” modes from single-player adventure game-like quests to crazy side-games like MK Kart Racing and MK Puzzle Kombat), the move to 3D just never FELT right.

Thankfully that all changes NOW! E3 is here baby, and I have my first pick of the show. The 2011 Mortal Kombat, which is entitled simply “Mortal Kombat”, returns the franchise to it’s roots while offering glorious 3D graphics with side-scrolling gameplay. Since the game is actually 3D, it allows for some absolutely crazy sh*t that simply could not have been done in the past. And it looks very good while doing it.

All of your favorite classic characters return and they are going back to the original series (for the most part) with favorites like Sektor, Raiden, Sub-Zero, Shao Khan, Kung Lao, Johnny Cage, Reptile, Nightwolf, Mileena, Smoke and more.

Along with a return to M-rated violence, the game will include an all-new graphics engine, the return of classic-style Fatalities and classic stages (including the Pit!), a deep story mode (which the developers claim will be the “deepest story mode of any fighting game”), all-new Tag Team gameplay for up to four players, a new “Co-Op Arcade Mode’ and extensive online play and modes including “team” matches. The developers promise Mortal Kombat will have the “most extensive online experience ever seen in a fighting game.” And it definitely seems like this new MK is taking the best elements of Mortal Kombat 1, Mortal Kombat 2 and Ultimate Mortal Kombat 3 to create an almost updated version of those games.

MK is being developed by “NetherRealm Studios” with series co-creator Ed Boon leading the team and Warner Bros. Interactive Studios publishing (WB bought the rights to MK from Midway when Midway went under).

“We are bringing the Mortal Kombat franchise back to gamers with the talented NetherRealm Studios team creating the game fans long to play,” said Martin Tremblay, President, Warner Bros. Interactive Entertainment. “Re-establishing the brand with Warner Bros. Interactive Entertainment, Mortal Kombat innovates on past games while staying true to the brand’s legendary characters and fighting style.”

“We can’t wait for players to get their hands on Mortal Kombat,” said Ed Boon, Creative Director, NetherRealm Studios. “This game really is a response to what players have been demanding: mature presentation, reinvented 2D fighting mechanic and the best, most gruesome fatalities ever!”

Here is the debut trailer!

I think it’s interesting that the kind of “choppy” animation remains intact . . . part of me wishes they’d truly create fluid animation. But maybe at this point it wouldn’t be MK without it, eh? Then again, Mortal Kombat Trilogy was anything but choppy.