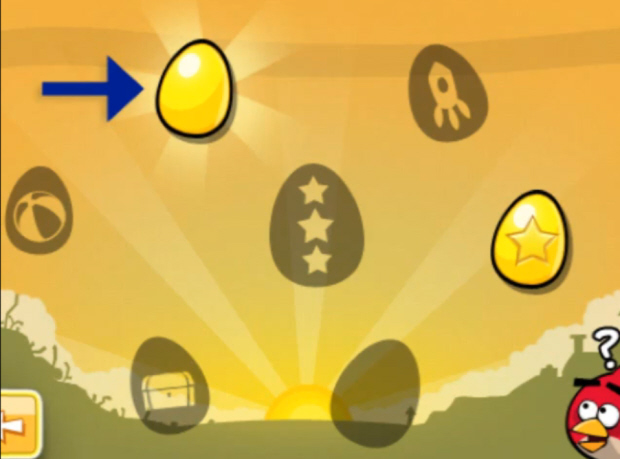 Looking for how to find all 10 Golden Eggs in Angry Birds for the iPhone/iPod Touch (iPad)? Our guide will help you to accomplish just that!

So how do you find all the Golden Eggs? Here is how:

Golden Egg #2: Tap on the Sun in the background after clicking “Play”.

Golden Egg #3: While on any level, click “II” followed by the Question Mark. Now play the picture of the White Birds.

Golden Egg #4: Get all of the Stars for Theme’s 1, 2 and 3. Alternatively, you can beat your previous high score in each theme to find the Golden Egg.

Golden Egg #6: Click on the Treasure Chest underneath the building on level 1-8.

Golden Egg #8: In level 4-7, first zoom out. You’ll notice a yellow bird in the top right corner that gives you this Golden Egg.

Golden Egg #9: In level 5-19, first Zoom Out. You’ll find it above the rocket, it’s outside your viewing area but you’ll see it when the screen scrolls up a bit. Use a Yellow Bird or drop a bomb with a White Bird in order to make the carcass’ fly up. Either of these methods can net you this Golden Egg.

Golden Egg #10: In level 6-14, you’ll see a yellow balloon underneath a treehouse on the right side. Use a new bird and a Boomerang to hit the balloon and score this Golden Egg.

Golden Egg #11: To the right of the “Coming Soon” screen, the eighth theme, you can find the Golden Egg by sliding the page to the left. The Golden Egg will be on your right.

Golden Egg #13: This egg is found on Levels 8-15 in the left hand bottom corner, where you have to get a bird past the boxes to hit the golden egg.

Golden Egg #14: Go to Levels 9-14 and zoom out, it’s in the right hand bottom corner. Fling a bird towards it to grab it.

Where to find and collect all the Stars in Angry Birds

In order to get the Golden Eggs, you’ll need to get all the Stars first. This video shows you how to accomplish that.

Stars #1-5: Five of the eggs contain actual levels, just smash everything to clear the levels to gain the stars.

Star #6: The middle golden egg contains a soundboard with all the different items, in order, press: group of pigs, group of birds, catapult, any bird, any block, and lastly any pig.

Star #7: The bottom middle golden egg also contains a soundboard with all the background music, press: any two of the radio buttons at the same time.

Star #8: The bottom left golden egg contains a picture of a big green-yellow nose, cover both the noseholes to gain the star.

Star #9: The middle right golden egg also contains a picture but of a large beak, separate the beak to gain the star.

Where to find and collect Stars 10-14 in Angry Birds

Star #10: Shoot the red bird in the middle row and while it is knocking down the blocks, shoot the yellow bird over the top to the explosive boxes. The idea here is to destroy the wooden block covering the balloons, so that the stone ball can go through to the balloons rather than getting stuck on the wooden block. There may be other ways to get this star as well.

Star #11: You can either try getting all of them with your yellow birds, or there’s a bar of explosives holding stone blocks above the screen for you to aim and shoot at!

Star #12: On the soundboard, the sequence you press on the birds in is: Blue Bird, Red Bird, the second Black Bird, Blue Bird, and lastly the Green Bird.

Star #13: Smash everything, as per usual. A tip is to hit the wooden block above the pigs, doing so will have them drop onto the explosives on the ground.

Star #14: Aim your bird at the bottom of the top floor, of the most-left building, to topple it against the other two buildings with pigs. They should all fall in one go like dominoes.