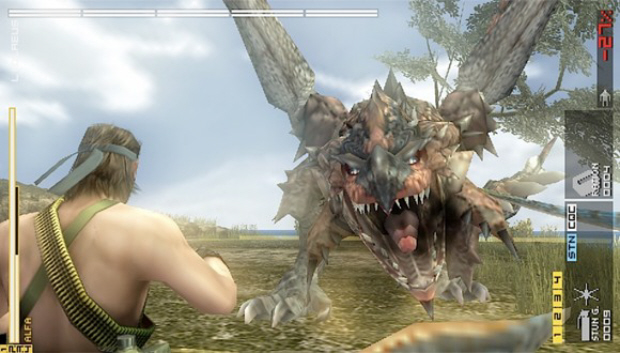 In this Metal Gear Solid: Peace Walker walkthrough, you’ll see the beginning to ending moments of cutscenes and gameplay that is available for the latest MGS game on the PSP.

Stories tell of a legendary soldier who, with Metal Gear in his command, had once waged war against the world. His name was Naked Snake, a.k.a. Big Boss. Now, in response to a world hungry for answers, the truth behind this legend will finally be told.

The era is the 1970s. Big Boss has stations his “Soldiers without Borders” in Columbia, South America, where he was approached by a visitor from Costa Rica, “a Nation without a Military.) In the wake of the Cuban Missile Crisis, as Latin America became a key to maintaining the power balance between East and West, Costa Rica has miraculously managed to maintain its peace and neutrality. However, in various regions of the country, a mysterious armed force seemed to be engaging in suspicious activities. Now, to preserve peace in this nation without a military, the “Soldiers without Borders” move into action. In time, they would come to be known as the founders of “Outer Heaven”…

Developed by legendary Hideo Kojima — the mastermind behind the most successful video game tactical-espionage series of all time — this game lets players take control of the famed Naked Snake at a critical junction in modern history. Advanced co-operative techniques allows multiple players to sneak into the fray and accomplish the mission together.

The legend of Big Boss continues to evolve through the double-helix formed by the fusion of “Missions” and the development of “Mother Base.” Prepare to delve into a new dimension of the METAL GEAR saga.

The first installment of official gameplay footage from “METAL GEAR SOLID PEACE WALKER,” developed specifically for the PSP. To start off, we are highlighting gameplay showcasing the true thrill of the MGS series, “solitary infiltration.” Snake will infiltrate enemy territory, solo… What does Snake have in store for us to see? Be sure to check out the footage featuring new systems and items that could only be realized in “PEACE WALKER!”

The second installment of official gameplay footage from “METAL GEAR SOLID PEACE WALKER,” developed specifically for the PSP. In this video we are introducing “CO-OPS” footage, showing cooperative sneaking, that makes its debut in PEACE WALKER! Be sure to experience the awesome gameplay made possible by the new systems and variety of items that could only be realized in “PEACE WALKER!!” Everyone, “Say, Peace!”
now with European release!

This is the third installment of official gameplay footage from “METAL GEAR SOLID PEACE WALKER,”
developed specifically for the PSP. In this video, we will once again be featuring the cooperative “CO-OPS”
gameplay that makes its debut in PEACE WALKER! This time, 3 buddies will unite to face off against an attack helicopter. Reinforcements are repeatedly dispatched, missiles and bullets continuously rain down, the members are knocked-out one after another… Will they make it through this crisis!? Be sure to check out the feature-packed gameplay made possible by the new systems and variety of items available only in “PEACE WALKER!!”

This release is the final installment of official gameplay from “PEACE WALKER” and has undergone minimal editing to feature the rawest footage possible! This is proof-positive that in addition to the new play-style available in the game, the hard-core gameplay that the MGS series is known for, lives strong in PEACE WALKER. Why did these soldiers, in a league of their own, abandon their country? Why do they choose to continue to fight? Watch Snake in all his glory, during his solo infiltration, as he continues his battle as the theme song, “HEAVENS DIVIDE,” plays in the background.

Those won’t help you in any way but are fun nonetheless, check out these “April Fools” Peace Walker videos.

The big surprise that was announced was, can you believe it, that the monsters from “MONSTER HUNTER” will be appearing in the world of “PEACE WALKER!” The latest installation of the original stealth action series from KONAMI and the smash hit “MONSTER HUNTER FREEDOM UNITE” join forces to realize a dream collaboration in “PEACE WALKER.” Will the legendary solider, Snake, be able to hunt and defeat the monsters that appear in 1970s Costa Rica? Oh, and did we mention that you can spit-roast Rations?

This is the gameplay trailer released on April 1, 2010. Originally thought to be an April Fools joke between Ubisoft and Konami, it turned out to be a real mission in the game. Snake gets to be an ancient and deadly assassin.

We’ll add the rest of the missions when they become available.