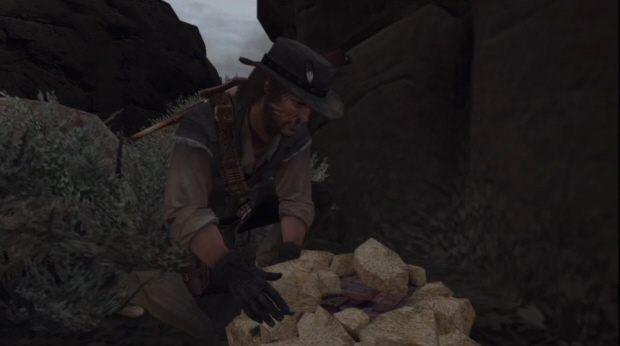 Here’s a Red Dead Redemption Treasure locations guide that serves as a walkthrough to discovering all of the Treasures for Rockstar’s Westerner on Xbox 360 and PS3.

Finding and collecting all 9 treasures in the game will unlock the “Frontiersman” Achievement / Trophy. It will net you 20 Points to add to your GamerScore for Xbox 360 or a Bronze Trophy for the PS3 version.

For in-depth details about how to find each treasure in Red Dead Redemption you can read more below.

Start this the challenge by helping a stranger from getting killed. In return, he’ll give? you the first treasure map. Once you find the Hanging Rock, go in between the two giant rocks and you’ll find the treasure chest hidden on the ground, as seen in this video. — Rhode’s Gold is worth $150.

Starting location is on top of Del Lobo Rock which is directly east of Fort Mercer on the map. This one is tough to explain so you’re best to just watch the video. But you essentially head from the fire to a shrub in the distance and through a path where you see the water in the distance. Then start making your way down the left side of the mountain to various bare spots. The chest is very well hidden by the rocks that cover it, but it is on the side of the cliff in walkable areas. Use this video to show you where exactly it is located. — Jackson’s Gold is worth $188.

Treasure Location #3 – Found at Tumbleweed, South of the Gaptooth Ridge

After clearing the mansion, make your way to the back and through the doors leading into the basement/underground area. You’ll find the Treasure along the left wall under an animal skull hanging on the wall above it. Figure out how to find it in this video. — Calhoun’s Gold is worth $225.