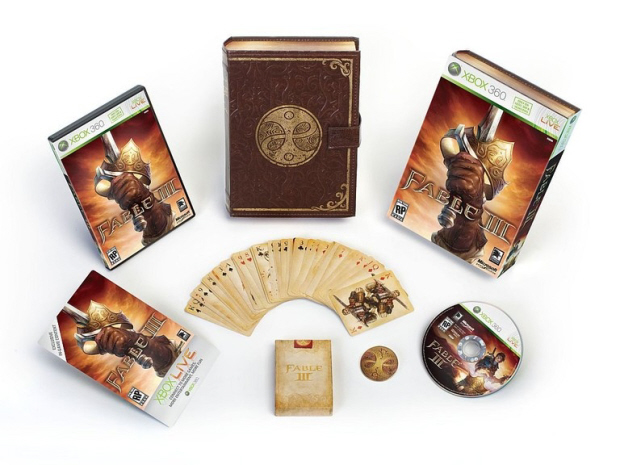 Fable 3 has been confirmed for PC in addition to having a limited edition version announced the Xbox 360 version.

It will cost $60 for the standard version of the game, whereas the Limited Collector’s Edition will set you back $80 bucks. The PC version meanwhile will retail at $50 and will be available to download exclusively through Games on Demand via Games for Windows LIVE.

Here is what the Limited Edition will get you:

* A new quest: Uncover the mystery of the haunted forests of Silverpines and earn the legendary sword, Wolfsbane, deadly against wolves and balverines.
* Exclusive location: Unlock a new region, ideal for settling down with a family and discovering new treasures.
* “Fable III” playing cards: Created by Lionhead, these cards depict every type of character in “Fable III,” including Heroes, royals, rebels and villains from across Albion and beyond.
* Guild Seal Coin: The coin features a Good side (blue) and Evil side (red) to assist players in making critical decisions that will impact the fate of the world forever.
* A new dog breed: Renowned for its loyalty, the Boxer is a brave canine companion worthy of greatest Queens and Kings.
* One unique outfit: Unearth one male and female outfit from the mysterious, faraway land of Aurora, a new destination in your “Fable III” adventures.

The game has yet to get an official release date, but will likely be out this holiday 2010.

Here is the second developer diary for Fable 3.