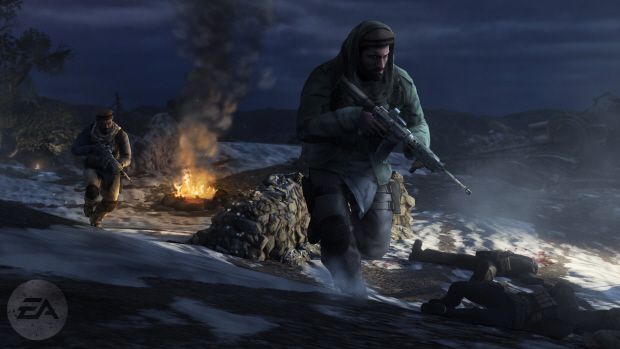 Medal of Honor will be released on October 12, 2010 in North America (Oct. 15 in Europe) announced publisher Electronic Arts.

Medal of Honor is a reboot of the popular first-person shooter WWII franchise. With this new installment, the game will be switched to the modern military age for the first time (which is a must in this post-Call of Duty 4 world) and will deal directly with the Taliban militants and will be highly realistic.

Below you can watch an all-new trailer for the game.

The trailer shows a U.S. Army Ranger platoon heading into combat aboard a helicopter. The chaos and uncertainty of the mission is belied by the reassuring voice of one of the Rangers as he reaches out to his family back home. The new provocative trailer is the latest in a series of trailers meant to portray the poignant experiences of today’s soldier.

“Medal of Honor is an authentic look into today’s war. Inspired by real people and real events, the game puts players in the boots of today’s warrior — from the infantry ground pounder to the Tier 1 Operator,” said Greg Goodrich, Executive Producer of Medal of Honor. “We are proud of this piece because it offers a glimpse into the game we’re creating, while also showing the mindset of these warriors.”

Medal of Honor leaves the WWII theatre for the first time in its 11-year history and enters the modern day setting of war-torn Afghanistan seen though the lens of a small band of fictional characters. As well, players will be introduced to the Tier 1 Operator, an elite warrior and relatively unknown instrument of the U.S.

Military that operates under the National Command Authority, taking on missions no one else can handle. The Medal of Honor single-player campaign is being developed by Electronic Arts in Los Angeles who has been working closely with Tier 1 Operators from the U.S. Special Operations Community to create the most authentic modern war experience possible.

To compliment the single-player experience, EALA has enlisted the multiplayer expertise of EA Digital Illusions CE AB. Together these studios are poised to reset the franchise for a new generation this fall.

Here is the new trailer.