Zeno Clash: Ultimate Edition coming to XBLA for $15 on May 5 release date 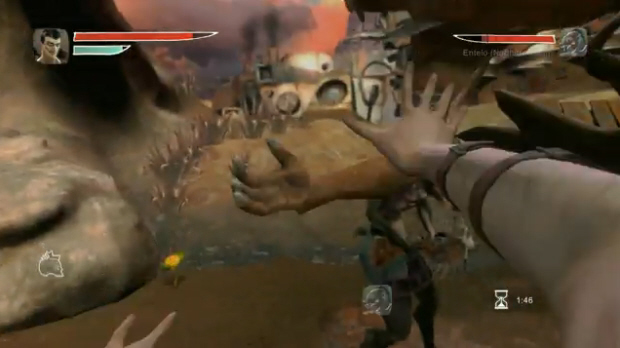 The “Ultimate Edition” moniker is due to the fact that the game will have a number of exclusive extras over the original PC version of this high-rated first-person brawler from Chilean Indie developer “Ace Team”.

As players progress through the game and meet all the intriguing inhabitants of Zenozoik, the new characters will be unlocked and viewable in the new Gallery Mode. Then you have the new Awareness System, which will provide for enhanced fighting. This Awareness system will help the player keep better track of who they’re up against and where they’re located via handy on-screen indicators. This allows the player to fight more efficiently, especially when they’re up against more than one enemy. There will also, of course, be Achievements to unlock.

However one of the biggest additions is a cooperative multiplayer survival mode. Enlist a friend to take on enemy waves in Tower Challenge, a special survival mode that offers additional replayability beyond the single-player campaign. Play cooperatively online, or locally via split screen. With leaderboards to rank you against your friends, the challenge promises to never end.

Story
In the land of Zenozoik, the city of Halstedom is ruled by a powerful clan, one which Ghat has betrayed by committing a terrible sin. Now, Ghat’s brothers and sisters are pursuing him and his companion Deadra through strange and twisted lands, beyond the boundaries of the sane to the ends of the world. What was Ghat’s crime and why did he commit it? The bare-knuckled brawl to reach the truth has just begun.

Key Features of Zeno Clash: Ultimate Edition for XBLA include:
* Fascinating world of grotesque beauty–Equal parts breathtakingly beautiful and utterly disturbing, prepare to be swallowed up in a surreal fantasy world powered by the Source engine. Explore lush environments and confront bizarre animal-humanoid foes on your mission of discovery and redemption.
* Visceral first person fighting–Combat is up close, personal, and entirely satisfying. Start with a series of punches, kicks, and grabs, follow up with a knee to the enemy’s face, and hit him with a finishing move to send him flying yards away. Learn new moves to mix it up. Guns and melee weapons offer additional power and tactical options.
* Ultimate Edition additions: The already highly praised gameplay has received an overhaul that includes combat rebalancing, interface enhancements, improved animations, new modes, and new gameplay content.
* New cooperative play modes.

Here is a trailer showing the Gallery and Awareness additions in action.

Major kudos to Atlus for bringing over this Indie darling to the console side. Hopefully a lot more people will be aware of it now.