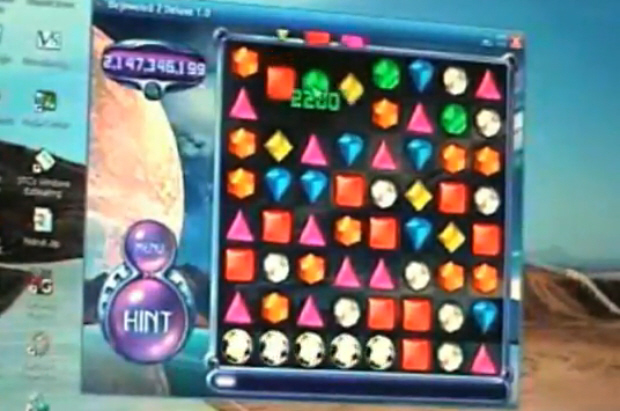 The Bejeweled world record is set as Mike Leyde beat the game, “properly” beat the game, becoming the first person ever to do so. And setting a record highscore of 2.147 BILLION points!

This great achievement was accomplished by American Mike Leyde who hails from Riverside, California where the 56-year-old works as a steel contractor.

The score he achieved was 2,147,483,647, on March 23, 2009. This score is the highest possible score that the game is able to process. Thus attaining this score means that Mike is the first person on earth to BEAT Bejeweled 2. This was done after an unbelievable 2,205 hours and 51 minutes of play time! Mike collected his 4,872, 229th gem and his score totaled more than 2.147 BILLION points!

Over the course of more than three years Mike spent over 2,200 hours – the equivalent of playing for 8 hours a day, five days a week, for an entire year – to reach Bejeweled’s highest pinnacle and stand alone as the games top scorer. Other statistics from Mike’s record-setting effort include:

Bejeweled co-creator and PopCap co-founder and chief technology officer Brian Fiete explains, “the highest score the game is capable of calculating is 2,147,483,647; that’s 2 to the 31st power minus 1. We had to give the game some sort of maximum displayable score, and figured that was high enough, no one would ever get that many points. When Mike collected that next gem match, the additional 2,200 points would have put his score above the maximum ‘calculable’ score, and much like some of the original arcade games, it caused his score to ‘flip around’ to a negative number. Well, the game’s code wasn’t designed to display a negative number so it just showed a blank where the score should be!”

“While developing Bejeweled 2, we debated endlessly whether it was even possible to best the 2.147 billion ‘maximum’ score,” John Vechey, another of PopCap’s co-founders, reminisced. “We spent hours delving into intricate math equations and even created the ideal ‘AI program’ to play Bejeweled with a perfect strategy. We deemed it impossible to hit such a high score and thus kept the cap at 2,147,482,575 knowing we were safe. Finally, man has bested machine, jewels, and game developers.”

Here is a corresponding video.