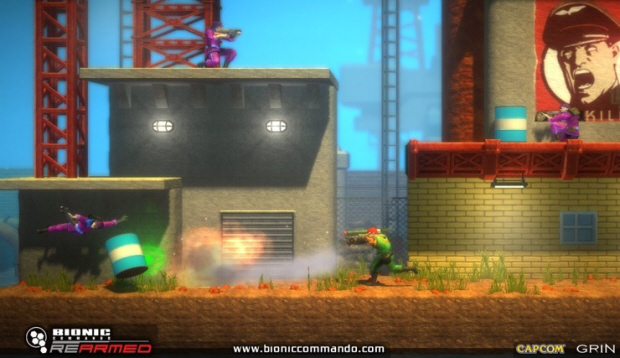 Bionic Commando: ReArmed 2 has been announced at Capcom’s “CAPTIVATE 2010” press event that took place in Hawaii.

Like with the announcement of Marvel VS Capcom 3 as reported by Planet Xbox 360, Bionic Commando: ReArmed 2 is under embargo (which means it cannot be talked about) until the game is officially announced at the upcoming E3 2010 Electronic Entertainment Expo that will be taking place in Los Angeles, California USA at the Los Angeles Convention Center and runs from June 15th to June 17th 2010.

The game is the sequel to the first Bionic Commando: Re-Armed, the best-selling Xbox Live Arcade and PlayStation Network digital download from last summer which was a remake of the original 1988 NES game “Bionic Commando”. It ended up being an arguably bigger hit than the console Bionic Commander Xbox 360/PS3 that the game was made to promote. Given that, a sequel to the downloadable hit only makes sense. The first game was developed by the GRIN who is gone, so it remains to be seen who will be tapped to developed Re-Armed 2.

As of right now absolutely no details on the sequel have been reported, but we are sure to learn more soon.