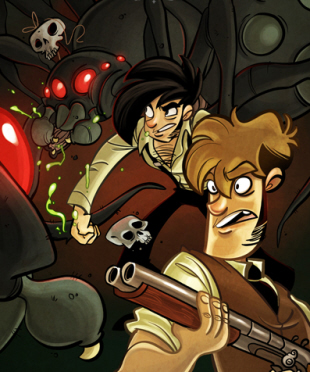 “Hothead has DeathSpank and they have a chance to do something really cool with it. And they need to have an opportunity to make it incredible.” So why not make both titles? “They definitely could’ve done both games. I think they could’ve made DeathSpank and Episode 3 but I think Episode 3 would’ve suffered. I mean, I know it would have suffered. So we’d rather not do it than do it half-assed and so we’re going to finish that story but it’s going to be on our website,” says Jerry Holkins.

“Right now my focus is on trying to create an episodic story-based version of the remaining games. It’s going to be like a book that comes out. According to the traditional model of episodic fiction,” explained Holkins, comparing the upcoming book to Dickens’ illustrated episodic classic, The Pickwick Papers.

So at least fans who did enjoy the games will have the tale completed, just not in the form you may have hoped for.

This should come as a warning for all those who love talking and commenting about videogames who may consider making one one day. It ain’t as enjoyable or fun as we all think/hope it would be.