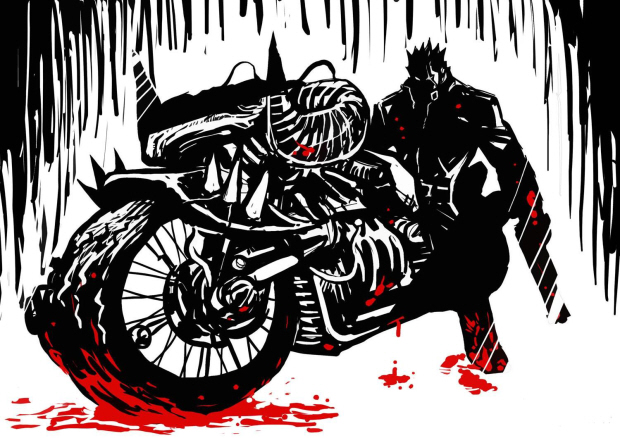 You can buy MadWorld for $9 on Amazon for those Mature gamers who may have missed the violent black and white action game.

Although it is a shame that the game didn’t achieve high sales since so much creative energy was put into making a unique Wii game that also targeted older owners, it’s still great for us consumers who may have never have picked up the game at a high price to see it selling for so low.

If you haven’t checked the game out yet, now is as good a time as any to do so.

Sega’s Madworld is an inventive third-person action game exclusively for Wii. Produced by Atsushi Inaba, MADWORLD features a unique black and white style depicting an incredibly sharp backdrop that straddles graphic novels and 3D worlds. As players battle opponents, they must master the use of various weapons and items found within their environment, such as chainsaws and street signs, while entertaining sports commentary adds to the third-person gameplay. With its irreverent humor and over-the-top violence, MADWORLD delivers a unique core gaming experience for Wii owners.

Playing as the mysterious Jack, you must rely on your wits and your brawn to set ingenious traps, pummel opponents and fight hand-to-hand using your Wii Remote and Nunchuk controller to turn anything in the environment into a weapon, from daggers and chainsaws to sign posts and garbage cans. Hone your skills in exciting, ultraviolent multiplayer mini games, then launch yourself into the Death Watch game and attempt to rack up wildly creative and bloody kills that will earn you points and increase your chance of survival. And while you kill and maim, enthusiastic announcers offer entertaining sports-style commentary of the game highlights, heightening the surreal feeling of this undeniably MadWorld.

Key features of MadWorld include:

* Play as Jack, a mysterious participant in the Organizers’ Death Watch game whose ultimate goal is to save the terrorized city.

* Utilize your Wii Remote and Nunchuk to battle hand-to-hand with daggers, bats, chainsaws and other weapons while delivering brutal finishing moves.

* Watch this insane and innovative world come to life before you in a unique black-and-white graphic novel artwork style.

* Earn points in the Death Watch game for your bloodiest, most creative kills — the more points you earn, the better your chances of staying alive to save the city.

* Improve your skills and punish your opponents in a series of ultraviolent multiplayer mini games available in each level.

* Listen to humorous commentary from sports announcers who offer play-by-play on the spectacular mayhem.

PS
Looks like there are a bunch of other cheap videogame deals on Amazon! Two others I noticed: Professor Layton and the Diabolical Box is $5 off ($25) and The Legend of Zelda: Spirit Tracks is selling for $20 down from $40!