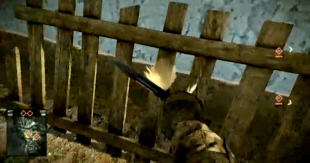 Destroy a building with a knife in Battlefield: Bad Company 2. That’s right, bringing a knife to a building fight! Oh yeahhh.

No that’s not a typo. There is a very strange and amusing (not to mention awesome) glitch in EA’s first-person shooter war game that allows you to destroy a building using only a knife!

The building is located in the secon building at the set of M-Comm stations. In order to bring the building down, the player destroys two particular wooden fences which causes the entire building to collapse.

Some people are saying that it isn’t actually a glitch . . . but bringing a building down with a knife ain’t exactly super realistic. Although if you were to take out the support then MAYBE it’s possible. Although others are saying the video is fake altogether, and that a friend’s C4 charge went off to purposefully collapse the building.

Either way, you can check out this intriguing clip yourself right here. What are your thoughts?