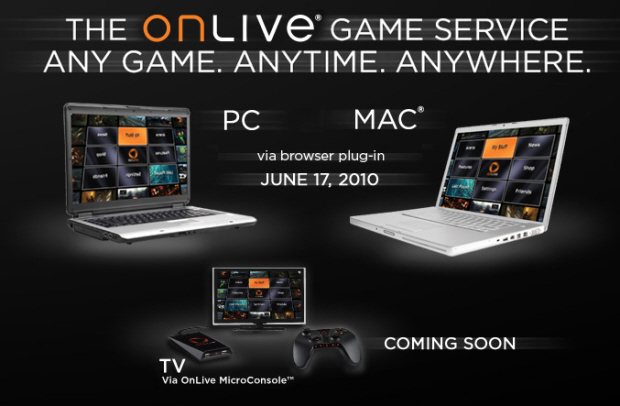 OnLive will be released on June 17th in streaming Internet form at a cost of $15 dollars a month, announced company CEO Steve Perlman at GDC 2010. This marks exactly one year after OnLive was announced at GDC 2009.

The date above is when the service will officially go live, via a downloadable application/plug-in for both Windows and Mac (as well as some Smartphones) that allows you to play the highest-end PC games directly in your browser as-is. The launch will be limited to the lower 48 states in the USA (so Hawaii and Alaskan gamers, as well as those in Canada or Mexico, will be out of luck for now) and international dates have yet to be announced.

The Micro Console will be launched at a later date. With this small, physical piece of hardware, gamers can actually hook the OnLive gaming system up to any TV and then, with an Ethernet cable plugged in, you can play high-end PC games using the OnLive Cloud service directly on your TV. Alternatively, you can simply play on your computer with the application and monthly fee on June 17th.

However once you have paid the $15 monthly fee to sign up for the service and downloaded the application, you will then need to pay an additional price to download individual games (which, when you think about it, isn’t much different than Xbox Live). Although you can demo them first or simply “rent” them, and you will have access to all the community features like your profile, friends list, Brag Clips gallery, etc. by signing up.

Additionally, the first 25,000 people who sign up for the service via the OnLive web-site will get their first three months of OnLive service FREE. Multi-month pricing and other promotions will also be revealed as the launch date nears.

Once the service has launched, OnLive will continue to be updated for the future. Starting in 2011, high-definition 1080p games running at 60 Frames-Per-Second will become available. And then of course, it will slowly be rolled out in other territories.

If you know nothing about OnLive, watch this video which explains it. You can also see a list of additional games that may or may not be supported.