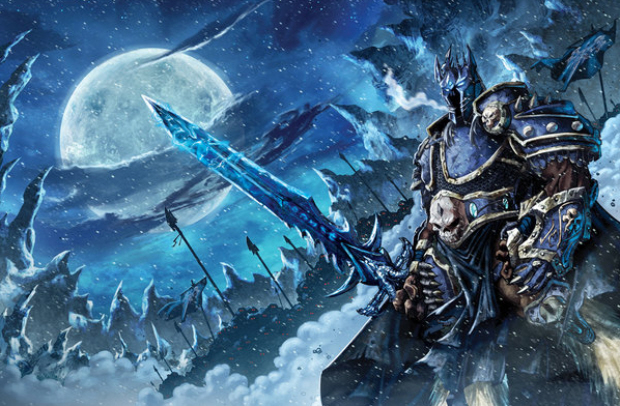 World of Warcraft Patch 3.3.2 has been released and it finally concludes the Lich King saga with an ending cinematic for the game. You can watch it below but beware that it contains major spoilers.

With this ending scene, the stage for the next WoW expansion, World of Warcraft: Cataclysm, has been set.

Here is the World of Warcraft: Wrath of the Lich King ending cinematic.

Naturally the 3.3.2 patch also adds a ton of stuff, which you can check out in the list below.

Frostwing Halls, the final stronghold of the Scourge and their Lich King, has been added.

Brann Bronzebeard has been getting into shape and now feels comfortable walking faster when escorted.

The Forge of Souls

The Devourer of Souls will now cast Mirrored Souls less often.
The Spell Reflect ability has been altered on several creatures. It now has a cast time, only has 2 charges, and has a 75% chance of reflecting spells.

Anomalus will now use the Create Rift ability only once, down from 3 times.

Players can now zone back into the instance if they are dead while encounters with Krick and Ick or Forgemaster Garfrost are in progress.

Skadi the Ruthless can now be removed from his drake with 3 harpoon strikes, down from 5.
Svala Sorrowgrave now casts Ritual of the Sword 1 time during the encounter, down from 3.

Toravon, the latest boss to join the Vault’s giants and masters of the elements, is now accepting challengers in 10- and 25-player formats.

The time between a boss being defeated and a new portal opening has been decreased.

All healing abilities (including items such as potions) will be decreased in effectiveness by 10% when in Battlegrounds, Arenas, or Wintergrasp.
Arenas

Demonic Pact: The damage bonus granted the warlock by this talent has been increased from 1/2/3/4/5% to 2/4/6/8/10%. The buff granted to a raid or party by this talent remains unchanged.

Concussion Blow: The damage done by this ability has been reduced by 50%, but its threat generation will remain approximately the same.
Devastate: This ability now deals 120% of weapon damage, up from 100% of weapon damage.
Shield Slam: The damage scaling from block value for this ability now diminishes faster and diminishes starting at a lower block value. The difference should be negligible for players in high-end tanking armor. In addition, the threat caused by Shield Slam has been increased by 30%.
Warbringer: This talent no longer allows Charge and Intercept to break roots or snares. Intervene remains unaffected.

The party leader is now referred to as Guide in chat when a group is formed via the Dungeon Finder.
Fixed a bug where players with Raid Assist capabilities were unable to perform a Ready Check.
Fixed a bug where the first couple of tutorials were not displaying upon logging into the game.

New strength-based melee DPS rings are now available from representatives of the Ashen Verdict.
Tier-9 Sets: The Aspirant vendors at the Argent Tournament grounds have worked out a deal with merchants in Dalaran so that all item level 232 set pieces will now be available on armor vendors in the city. Set pieces which require trophies will still be available for purchase only from vendors at the Argent Tournament grounds.
Tier-10 Balance Druid 4-Piece Bonus: Fixed a bug to allow for this bonus to properly trigger.
Tier-10 Elemental Shaman 4-Piece Set Bonus: Redesigned. Successful Lava Burst casts now increase the duration of Flame Shock on the target by 6 seconds.
Tier-10 Tank Sets: The gloves and chest pieces for warrior, death knight, and paladin tanks have had their stats adjusted slightly to provide additional armor value.
Tier-10 Warlock 4-Piece Bonus: This bonus should now correctly be applied to the warlock’s pet.

The cvar ‘processAffinityMask’ controls which CPU cores are available for the World of Warcraft client to use. Previously the game client was limited to 2 cores as a default which players could override in the configuration file. In the past this provided a performance boost on some CPUs and operating systems. We have identified several systems that are experiencing severe performance issues with this restriction and have removed it. Players who would like to restore the old behavior can do so by updating the Config.WTF file by adding: SET processAffinityMask “3”.

Lich King artwork thanks to Jonboy007007