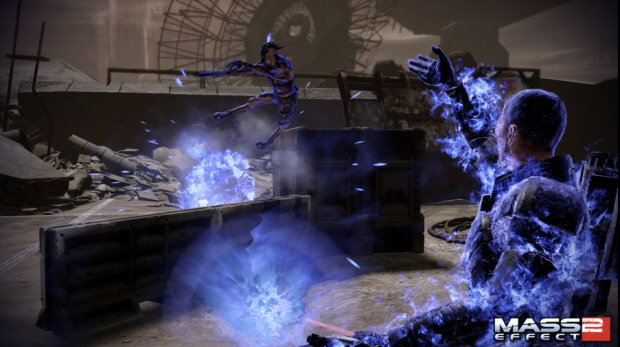 Here’s a list of Mass Effect 2 codes, cheats, unlockables and Achievements for BioWare’s epic sequel on Xbox 360 and PC.

To enable the cheat box, go to Documents>BioWare>Mass Effect 2>Config on your PC. Now open BIOInput in Notepad. Go to the line that says [Engine.Console] and under it add the line ConsoleKey=Tilde. Now when playing the game, press the Tilde Key on your keyboard (~ is located above the Tab Key) and that will open the console for you to type the cheat you want to activate, listed below.

How to unlock Mass Effect 2 Armors and M-90 Weapon 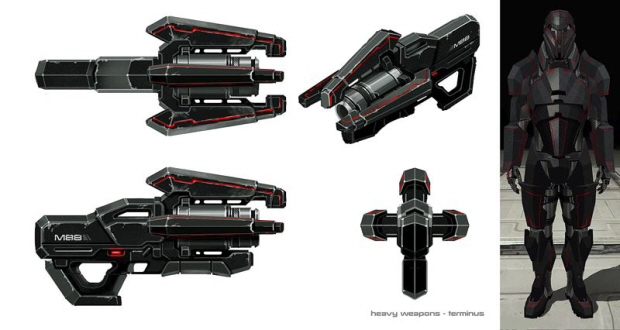 If you pre-ordered Mass Effect 2, then you’ll be privy to some secret and rare weapons and armor that people who didn’t reserve their copy won’t get access to. This will greatly enhance Commander Shepard’s skills and abilities, making it easier (and more fun) for you to complete the game.

We’ll add the pre-order codes here when they becomes available for all to download.

PS3 owners get free gear: Until February 23rd, 2011, Mass Effect 2 players on Playstation 3 can download the Terminus Armor and M-490 Blackstorm Projector Weapon free of charge from the PSN Store. After February 23rd, the Terminus Gear will still be available, but as paid DLC.

The bonus weapons and armor you get depends on where you pre-ordered the game from. Here is the list:
GameStop Pre-Order Bonuses Include:
* M-90 Blackstorm Heavy Weapon – Generates a high-powered localized gravity well, accelerating particles to near-infinite mass, and ultimately expanding the selection of heavy weapons available to players when they gear up for combat missions in Mass Effect 2.
* Terminus Armor – Designed for use in extreme planetary conditions, increasing run speed and personal shields, and augmenting weapons with an additional magazine of reserve ammo…
How to Redeem and activate Gamestop Terminus Armor code:
o For Xbox 360 / PC go to the Code Redemption page here: http://social.bioware.com/redeem/
o Sign in with your existing account or create a new account (make sure to sign in using the exact same account on your Xbox / social.bioware.com)
o Enter the Terminus / Cerberus code
o Upon successful redemption restart your console and load the game to complete / load the game and login, then upon successful redemption right-click on the download link and save to your computer. Install file. Restart game to complete.

Pre-Order Elsewhere to get:
* Inferno Armor – Used by officers to monitor battlefield conditions by recognizing elevated heart rates, and regulates sub-systems with extreme efficiency to allow for greater response times – together these abilities translate in-game into a negotiation bonus for Commander Shepard and an increase in run speed and augmented damage from combat powers.

Buy and register Dragon Age: Origins at EA.com to get: Blood Dragon Armor – This special armor’s microframe computer adapts to any top-tier omni-tool, kinetic barrier, or biotic amp, giving seemless and error-free performance. The chest and shoulder piece bears the logo of the Edmonton Blood Dragons, and the inside of the armor bears the signatures of the entire team.
How it boosts your stats:
* Increases power damage by 15%
* Increases shield strength by 10% 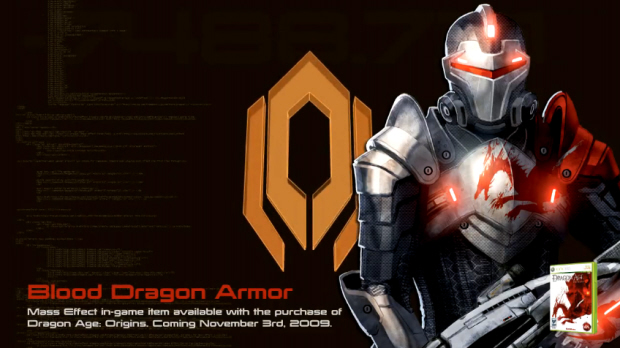 Any launch day downloadable content for Mass Effect 2 will be free. “BioWare will not be charging extra for any new Mass Effect 2 content on launch day.” This includes not only armor and weapons, but also an unlockable planet / mission and a new ally named Zaeed Messani. All will be accessible via the in-game store called the “Cerberus Network.” Both retail and digital versions will include a code to unlock this DLC portal.

Just like in the first Mass Effect game, a “New Game+” mode is available in Mass Effect 2. This will allow you to replay the game after beating it with the same character import file, allowing you to play the game again with all of your stats and choices intact. Additionally, those who played through Mass Effect 1 and saved their file, will be able to import it into Mass Effect 2! There will be a maximum of 11 end-game-saves possible. All the choices you made in Mass Effect 1 (Did you save the Council? Who survived Virmire? How did you handle your most ardent fan?) will affect the world and direction of Mass Effect 2.

To clarify, “The information pertains not just to what your ending was, but to literally hundreds of things. Anytime we have a plot or a character or situation in Mass Effect 2, we think about what you did, potentially, in the first game that might affect said plot or character or situation in the second. We can look at each variable and dynamically change what happens in the moment,” says lead producer Casey Hudson. 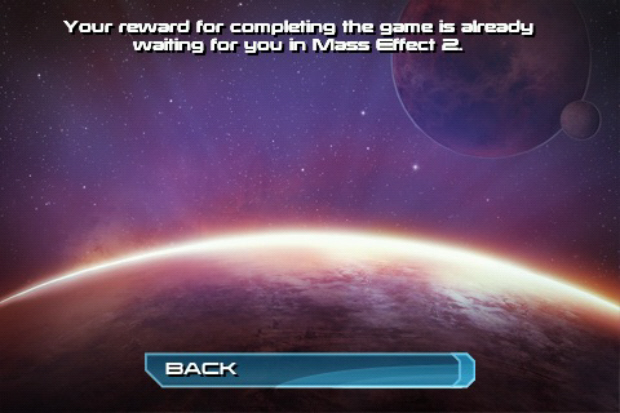 If you play through and beat the iPhone game Mass Effect Galaxy (previously entitled Mass Effect: Jacob’s Story), you’ll be awarded with a special bonus in Mass Effect 2. To activate the cheat, you will need to play through the iPhone game to completion and then login to your EA.com Account. To do this go to Extras within Mass Effect Galaxy, and then go to “Stay Informed”. Now make sure that your EA.com account is already linked to your Xbox Live GamerTag. If so you’ll get the following message: “Your reward for completing the game is already waiting for you in Mass Effect 2”.

How to enable Mass Effect Galaxy bonus dialog on Xbox 360 and PC:
* You must play and finish the Mass Effect Galaxy iPhone game and log into your EA account to upload the unlock.
* When playing Mass Effect 2 you must have Miranda and Jacob in your party to witness a bonus conversation between the two.

Where to buy pets in Mass Effect 2

If you’re wondering how to get pets and where. You can buy pets like Illium Skald Fishes and a Space Hamster at a souvenir shop in The Citadel. Once you’ve bought them, return to The Normandy 2 and go to your Captain’s Quarters. Watch the video below to see what they all look like once onboard in your cabin.

* Space Hamster description: “This small furry rodent looks up at you with what seems like a knowing smile.”
* Illium Skald Fish description: “Large spined fish common to the lakes of Illium.”

How is Commander Shepard still alive?

This video answers that burning question! Beware though, spoiler alert!

Get the scoop on all classes in the game on our Mass Effect 2 walkthrough page.