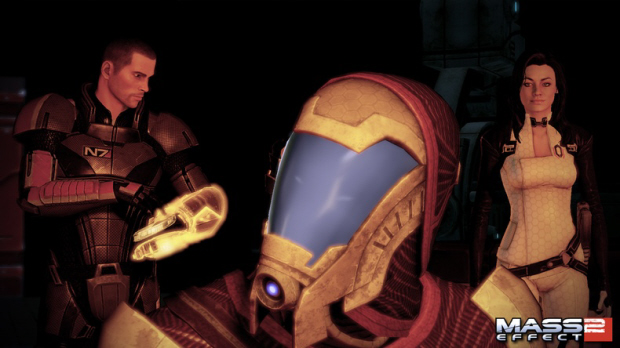 Mass Effect 2 features a cast of characters over 20 long, with both new characters and returning characters from the original Mass Effect. Since the game will be released soon, on January 26, 2010 for Xbox 360 and PC, we thought it time to take a look at the characters that will appear in Mass Effect 2.

CHARACTERS (click on a name to see a character image)

1. Ashley Williams (voiced by Kimberly Brooks)
This squad member of Commander Shephard’s is a human soldier (Gunnery Chief) who has had a lifelong career as a Marine. Thus she has a very tough attitude and was rescued during the Geth attack on Eden Prime. She is a possible romantic interest for Commander Shephard.

2. Commander Shepard (female voice Jennifer Hale, male voice Mark Meer)
The hero and main human protagonist of the Mass Effect series, Commander Shephard can either be a male or female depening on how players customize their character. And even the storyline that players will encounter differs depending on the choices you make.

Born in 4.11.2154, Shephard graduated from the N7 special forces program and is assigned to the SSV Normandy as an Executive Officer during the first game. He later joins up with the Spectres as their first human.

But what happens to him after the events of the first Mass Effect?

3. Conrad Verner (voiced by Jeff Page)
This bothersome human is a huge fan of Commander Shephard’s. Extremely enthusiastic in his support for you, he loves everything about you and will give you the Citadel Fan Assignment when you talk to him in the upper Markets of the Wads.

4. David Anderson (voiced by Keith David)
The original captain of the SSV Normandy and a veteran human war hero, he was born in London but doesn’t have an English accent. He was the first to graduate from the N7 Marine program at Arcturus Station and served with honor in the First Contact War, he is highly decorated and is one of the most well known special forces operatives. This character played a major role in the Mass Effect: Revelation novel which was a prequel to the original Mass Effect game.

5. Doctor Chakwas (voiced by Carolyn Seymour)
A human doctor aboard the SSV Normandy, she originally enlisted in the military seeking a life of “exotic adventure” but soon found that the reality was not quite as romantic as her fantasies. Even still, she ended up staying and serving with the Alliance due to a sense of duty and honor that graduating from medical school and enlisting instilled in her.

6. Garrus Vakarian (voiced by Brandon Keener)
Garrus is a Turian investigator who works for C-Sec. Following the way of most Turians, he was trained at the age of 15, however he then followed in the footsteps of his father and became an officer for C-Sec. He is the one responsible for the investigation into Saren Arterius after the Alliance claimed that Saren had gone rogue.

7. Grunt
This long sought-out potential recruit of Commander Shepard’s is a unpredictable, dangerous and violent individual who possesses extreme physical strength and is a very skilled fighter. This makes him a valuable member of the team despite his shortcomings.

8. The Illusive Man (voiced by Martin Sheen)
A mysterious man who claims his goal is helping humanity achieve its rightful place in the galaxy. He leads the pro-human splinter-organization Cerberus.

9. Jacob Taylor (voiced by Adam Lazarre-White)
Formerly an Alliance Marine, Jacob Taylor is a valuable member of Commander Shephard’s squad and is a key protagonist of Mass Effect 2. A human biotic, he is extremely skilled in combat and works alongside his informant, Miranda Lawson. Very skilled in the use of Assault Rifles, Heavy Weapons, Biotic Abilities and Tech Attacks. Jacob resigned in his position as an Alliance Marine after surviving the Geth attack on Eden Prime, where he worked under Major Derek Izunami.

10. Jeff “Joker” Moreau (voiced by Seth Green)
This human pilot of the SSV Normandy, who goes by the nickname “Joker”, is an arrogant although outstanding pilot. Very boastful, he loves to point out his prowess in flight to others in a belittling manner, and that he earned all of his accomplishments and commendations, they weren’t due to medical issues . . .

11. Kaidan Alenko (voiced by Raphael Sbarge)
A member of Commander Shephard’s squad (the first member), he is an human Sentinel, Marine Detail Commander aboard the SSV Normandy. A biotic with controversial L2 implants, he has been lucky to avoid severe brain damage that usually comes as a result of the implants. Although he does suffer from severe migraines. He is a possible romantic interest for a female Commander Shephard.

12. Dr. Liara T’Soni (voiced by Ali Hillis)
This Asari Researcher has heavily researched Prothean technology. With “heavily” meaning for the past 50 years of her life. She is around 106 years old, born in 2077, which makes her still a child for her species. Already though she has a vast amount of knowledge of Protheans. She is a potential romantic interest for Commander Shephard.

13. Miranda Lawson (voiced and modeled by Yvonne Strahovski)
This human informant is an excellent judge of character (or so she thinks) and guides Jacob Taylor during his missions via hologram. She is a Cerberus operative whose vast connections are highly valuable.

14. Mordin Solus (voiced by Michael Beattie)
A fast talking Salarian, this doctor and scientist is the first Salarian to join Commander Shephard’s squad in Mass Effect 2. Currently Solus is looking for a cure for the plague (identified by the presence of Vorcha as a symptom). Solus is extremely smart, speaks very fast, and is “brutal in his thinking”; a person for whom the ends justifies the means.

15. Nassana Dantius (voiced by Grey DeLisle)
A diplomat for the Assari emissary to the Citadel, she gives you the Asari Diplomacy assignment.

16. Navigator Pressly
An elderly human aboard the SSV Normandy, he is very loyal even though he is prejudice to a degree against non-humans. However due to his since of duty, he will serve and remain loyal to whoever his commanding officer is. Setting aside his differences for the good of the Alliance. His grandfather served in the First Contact War.

17. Samara (voiced by Maggie Baird)
Part of a anti-government cell, this lawless vigilante is an Asari Justicar with strong convictions and a guilty burden due to an incident in her past. At 600 years old, she is nonetheless a powerful, yet graceful, biotic whose skills are useful in combat.

18. Subject Zero (voiced by Courtenay Taylor)
This human biotic female is a confirmed squad member of Commander Shephard’s with a mysterious, violent past that has made her unpredictable and hotheaded. Her fiery personality gives her a lust for combat, and her looks match her personality; shaved head, covered in tattoos for the kills and events in her life, sparsely dressed showing lots of skin and with a profanity-laden mouth. She was known to run with various gangs and at one point was a member of a cult. This “crazy bitch” nonetheless becomes a romantic interest for Commander Shephard.

19. Tali’Zorah nar Rayya (voiced by Liz Sroka)
A Quarian squad member of Commander Shephard’s, this young female is a mechanical genius. She is currently on a pilgrimage, which is a rite of passage for her for her to prove her worth and bring something of value back to her people who are aboard the Migrant Fleet. In the sequel life as she knows it gets turned upside down.

20. Thane Krios
A cool but calculated Drell assassin, Thane Krios likes to get up-close and personel before offing his targets. Even though he keeps his cool, he experiences extreme guilt over his job as a hired killer and always says a prayer for himself after his hit has been completed. He believes so strongly in his act of penance that he will ignore everyone and everything around him to clear his conscience.

21. Urdnot Wrex (voiced by Steven Barr)
One of the last of the Krogan Battlemasters, this Krogan mercenary slash bounty hunter initially encounters Commander Shephard after being hired by the Shadow Broker to kill Fist. But he ends up remaining with Shephard out of gratitude after killing Fist.

23. Normandy AI EDI (voiced by Tricia Helfer)
EDI (pronounced ‘E-D’ meaning Enhanced Defense Intelligence AI) is the ‘voice’ of the SSV Normandy SR-2 and is represented by a holographic floating blue sphere at various terminals throughout the ship.

These last two characters have been shown in teasers. But if you want to play the game spoiler-free, resist the urge to scroll down.

25. Legion (voiced by D.C. Douglas)
A Geth who calls itself Legion has learned to think for itself. It’s apart from the Geth neural network that normally binds them together in groups for sentient thought.