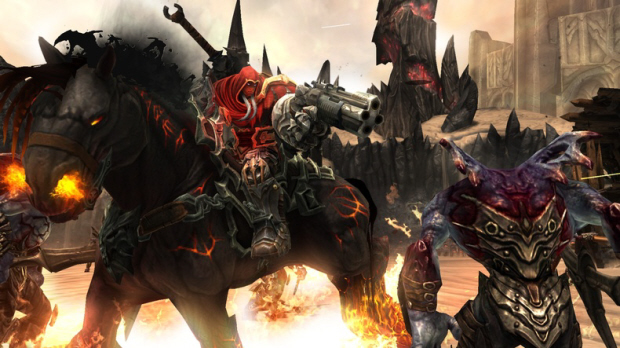 There are no less than 17 characters in the Darksiders cast for THQ’s apocalyptic action game; Which releases for the Xbox 360 and PlayStation 3 on January 5, 2010.

Here is the list of both good and evil characters in the game:

1. In the world of Darksiders, Abbaddon is an Angel who lead the forces of Heaven against the forces of Hell at the beginning of the apocalypse. However when he was killed, the portal back to Heaven shut, leaving the rest of his angelic soldiers cut off from Heaven. Thus they roam the skies of the chaotic world in a vengeful fury, randomly attacking demons (as well as your character of War). In the Bible Abbaddon is one of the named Demons.

2. Death is one of the Four Horseman of the Apocalypse. Wielding the famous Scythe weapon, which here is named “The Harvester”, Death has the typical look of a black robe/cloak and a skeleton body. He is also known as the Grim Reaper. The whereabouts of Death within Darksiders are unknown . . .

3. Fury is one of the Four Horseman of the Apocalypse. Or in this case, Horsewoman. Replacing the traditional “Conquest” Horseman, Fury weilds a whip made of fire. The whereabouts of Fury within Darksiders are unknown . . .

4. Ruin is the trusty horse that War, the main character, rides. The horse accompanies War all throughout the game and even into battle. The horse was originally normal, but got corrupted by hatred when it was mistreated in the underworld.

5. A corrupted demon or fallen angel in Darksiders, Samael defied his king, named “Destroyer” in Hell, and was thus sentenced to eternal imprisonment. Part of War’s mission is to find and free Samael in order to make a pact with him. In the Old Testament of the Bible, Samael is the name of the Archangel of Death.

6. Silitha is a spider demon who spins web over one part of the destroyed city.

7. Strife is one of the Four Horseman of the Apocalypse. He dual-wields two large handguns and replaces the traditional Famine Horseman. The whereabouts of Strife within Darksiders are unknown . . .

8. The Charred Council are mediators between Heaven and Hell. The council blame War causing the Apocalypse to begin before the predetermined time, causing the destruction of earth prematurely. Thus they are the ones who strip War of his powers and banish him to the Earthly realm.

9. The Destroyer may be the main antagonist and final boss of Darksiders, although this is only speculation. He is the ruler of Hell, and may be the Darksiders replacement for Satan. Although “The Destroyer” was also another name for Abaddon in Judeao-Christianity.

10. The Griever is a female demon who dwells in the subway system of the destroyed city in an area that has been flooded. She controls swarms of locusts known as her “pets”, i.e. the lowly vermin of Hell.

11. The Jailer is one of the mini-bosses in Darksiders and is composed of various corpses. A giant, evil demon.

12. The Watcher is entrusted by The Charred Council to be War’s warden. Thus he is the one who directs War to accomplish various tasks that the player must accomplish to proceed in the story. In the game he is voiced by Mark Hamill (Luke Skywalker in Star Wars, The Joker in Batman, et al).

13. Tiamat is one of the bosses in Darksiders, a giant female bat demon who haunts the “Twilight Cathedral”. The Great Flood in the Hebrew Bible has a name derived from the word Tiamat. Tiamat is also the goddess of chaos, rage and the sea in Babylonian mythology.

14. Ulthane, like War, is one of the “Old One’s”. That is, he existed outside of the creation of Heaven or Hell. He is known as a great craftsman of legendary weapons and armor.

15. Uriel is the name given to the archangel currently in command of the remaining Angelic forces on the destroyed Earth.

16. Vulgrim is a conniving merchant demon who will exchange War upgrades for souls.

17. War is the name of the player character in Darksiders, and the main protagonist. He is one of the Four Horseman of the Apocalypse. He is cast to earth for causing Armageddon to happen prematurely after the final battle, in which the forces of Hell win. Thus he is to walk the desolate and chaotic Earth forever as his penance, and has been striped of his powers. Because War believes he is wrongly accused, he uses this as his opportunity to clear his name and find out the real answers, and dispose of those truly responsible. His weapon is a blade known as the “Chaoseater”. In the game he is voiced by Liam O’Brien who is known as the voice of Gaara in the Naruto anime).

See the woes of War in this new trailer: