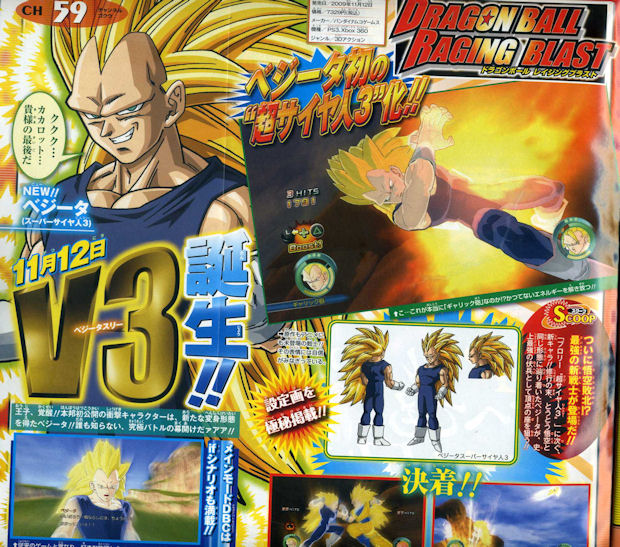 Super Saiyan 3 Vegeta was revealed in the latest issue of Japanese magazine V-Jump. He is the second, exclusive transformation in the Dragon Ball: Raging Blast videogame!

Never seen in the Dragon Ball Z nor GT series, Vegeta’s SS3 will appear as part of a “what-if” scenario in the story mode. This is one of the two “exclusive characters” being featured in Dragon Ball: Raging Blast when it’s released on Xbox 360 and PlayStation 3 in early November 2009. The first being the already infamous Super Saiyan 3 Broly.

The Super Saiyan 3 transformation has yet to be shown on video, but we’ll update this page as soon as Namco Bandai release an official trailer. Now that their power levels will match, count on Vegeta to take the fight to K-k-k-k-kakarot!

As always, us DBZ fans will keep you updated on the Dragon Ball: Raging Blast character list page.

Scan via Broly, thanks.