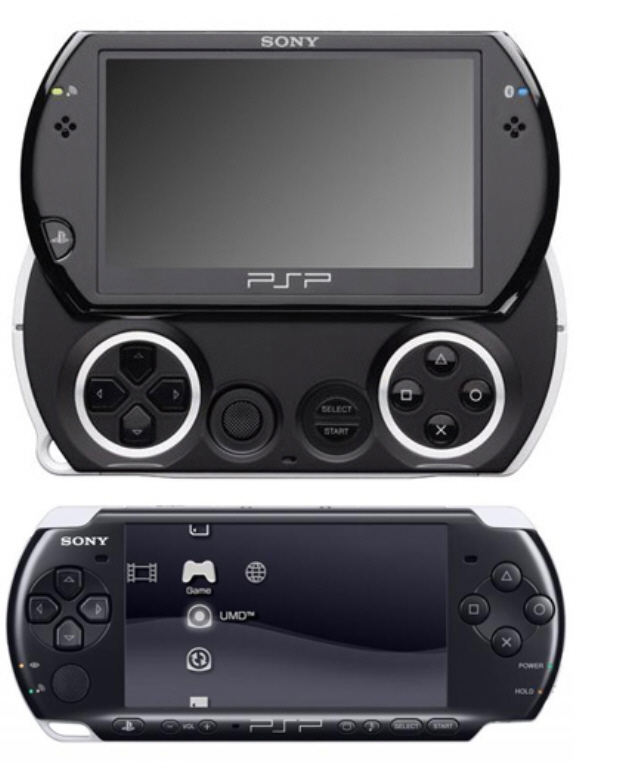 Now that the PSP Go is on store shelves, people have been wondering what the differences between that system and the PSP 3000 are (the previous version). So they can make an informed decision on whether to upgrade or purchase the new system over the previous versions.

Let’s start you out with an official video from Sony that shows the new features of the PSP Go and improvements over the PSP-3000. Watch it here:

Here is the basic information and differences on the PSP Go before we get to the direct spec sheet comparison.

* The PSP Go system (PSP-N1000) system costs $250 and was released on October 1st.
* The PSP Go is a complete evolution of the PSP 3000 system with an all-new look, form factor, medium, size and features.
* The system slides open like a cell phone to reveal the system buttons (when closed just the screen is visible). The sliding screen is both practical for the system’s space-saving design and aesthetically appealing.
* The system does not have a USB drive, and accepts downloadable games only.
* There is 16GB of internal flash memory to store downloaded games, videos, music, and photos.
* Memory can be expanded up to 32GB using a Memory Stick Micro (M2) flash card.
* The unit is 43% lighter and 56% smaller than the original PSP-1000 and 16% lighter and 35% smaller than the PSP-3000.
* Built-in BlueTooth. This can be used with BlueTooth headset, PS3’s DualShock 3 controller, and tethering.
* The PS3’s DualShock 3 controller only works with the PSP Go after first/once connecting both the PSP Go and the controller, via USB, to the PS3. After syncing them up the controllers works for all controls on the PSP Go just by turning it on. An added bonus of doing this is that PSone and PSP games will have rumble support, and you can play 2-player PSone games.
* Because the system does not accept games on disc, over 16,000 pieces of entertainment (games, movies, TV shows, etc.) are downloadable via the PlayStation Network.
* Over 150 titles previously on UMD disc are now downloadable from the PlayStation Store.
* 55 PSP Mini titles will be available this year.
* More than 60 PSOne Classics are now available for download.
* Over 2,300 movies and 13,000 TV show episodes are available for download.
* Two colors are available: “Piano Black” and “Ceramic White”.
* Battery life is still about 3-5 hours.

While the PSP Go is the newest system in the PlayStation family and will undoubtedly be Sony’s new favorite, the publisher is insisting that the PSP Go will not replace the PSP 3000, which will still be on sale and they will still be supporting.

Here is a list of the specification differences between the PSP 3000 and PSP Go.

Watch this video to see all the popular games on the PSP Go: