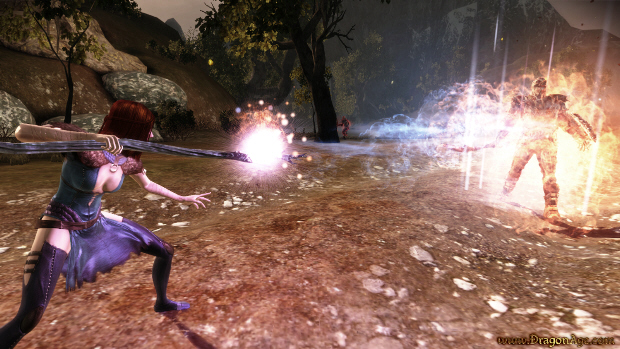 Dragon Age: Origins features a cast of over 14 characters in this all new RPG from BioWare, the makers of Mass Effect. The game will be released on November 3rd, 2009 for Xbox 360, PS3 and PC.

In Dragon Age, your choices change the world and affect the people around you. Certain situations, storylines, and conversation options will change drastically depending on your origin and your motivations. You choose your origin, and from that starting point, your story begins. You play through your character’s early days, defining his or her background and motivation and begin to learn more about the world of Ferelden from your own distinct perspective. Your choice of origin defines how you will view the world and how it views you. Choose a sneaky, disrespected commoner and you will play a story that focuses around subtle skills and careful wordplay. Choose a noble origin and the world will be much more positive and helpful, but those jealous of your status will not be afraid to take what you have, violently if necessary.

Here is a list of the main characters in the game:

1. Alistair (Voiced by Steve Valentine) – This young warrior was recruited by Duncan from his ill-suited placement into training to become a templar for the Chantry (the dominant religion of Ferelden). Alistair has seen a hard childhood since his mother died in childbirth. He was raised in service of the lord at the castle in Redcliffe. His experiences have hardened him and created a wry and irreverent sense of humor. Alistair is a confirmed romance option. Quote: “You smell great; is that death you’re wearing? It really suits you.”

2. Duncan (Voiced by Peter Renaday) – The dedicated warrior leader of the Grey Wardens who serves as a mentor of sorts to the player character. He has been entrusted with the task of leading the Grey Wardens in Ferelden. This is considered a difficult task because the Grey Wardens were exiled from Ferelden 200 years ago. Quote: “In war, victory. In peace, vigilance. In death, sacrifice.”

3. Flemeth (Voiced by Kate Mulgrew aka Kathryn Janeway in Star Trek Voyager) – Found in the Korcari Wilds, Flemeth and her daughters are notorious as “Witch of the Wilds” according to the Korcari Wilds people. Quote: “Lovely Morrigan has at last found someone willing to dance to her tune. Such enchanting music she plays, wouldn’t you say?”

4. King Cailan Theirin – Son of the legendary King Maric Theirin who drove the Orlesian Empire from Ferelden. The young and naive Cailan was the first King born into a Ferelden freed of foreign occupation in three generations.

5. Leliana – Leliana is from the Orlesian Empire and is classed as a rogue. She is a confirmed romance option.

6. Morrigan (Voiced by Claudia Black) – Morrigan is a shapechanging mage, taught by her mother in the wilds of Ferelden. Morrigan is a confirmed romance option.

7. Oghren (Voiced Steve Blum) – Oghren is a dwarven warrior who has not been introduced by the official Dragon Age website. Quote: “Misery, vomit and malt liquor. Ah, reminds me of home.”

8. Arl Rendon Howe (Voiced by Tim Curry) – A man of greed and manipulations and a supposed friend of the Cousland line.

9. Shale – Shale is a mighty stone golem that comes from The Stone Prisoner downloadable content pack. Shale will be available freely to all owners of a first-hand copy of the game. Those who purchase a previously owned copy have the option to purchase him for $15 USD.

10. Sten – An elder, powerful warrior of the Qunari people who is seeking atonement for unknown sins. Sten was introduced in a Gamespot character video.

11. Teyrn Loghain (Voiced by Simon Templeman) – Loghain served as the right hand of King Maric in the war against the Orlesians and now hopes to help guide Maric’s son Cailan in defense of the realm from the Blight.

12. War Dog – Mabari War Dogs are a prized and essential part of the Fereldan miltary. These trained hounds easily break the lines of pikeman, pull knights from horseback and with a pack of Marbari dogs, they can cause panic to even the most hardened infantry soldiers.

13. Wynne – One of the most prominent mages of the Circle of Magi. She is a powerful spirit healer. She often cautions young or arrogant mages of the innate dangers of calling forth magical forces from the Fade. Dangers which justify the common fear of mages and the horrible powers and creatures they can free from the Fade, intentionally or not.

14. Zevran – A male elf who excelled the ranks in one of the most infamous guild of thieves and assassins in all of Thedas, The Antivan Crows. When he was young he was sold to the Crows, although he resisted the brutal training at first. He became one of the Crows’ most promising assassins. He accepts a most dangerous commission yet, a target far-off Ferelden which he hopes would bring him unimaginable rewards.

Here’s a trailer showing the game in action.

Big thanks for the overviews to the official website and Silentcid!