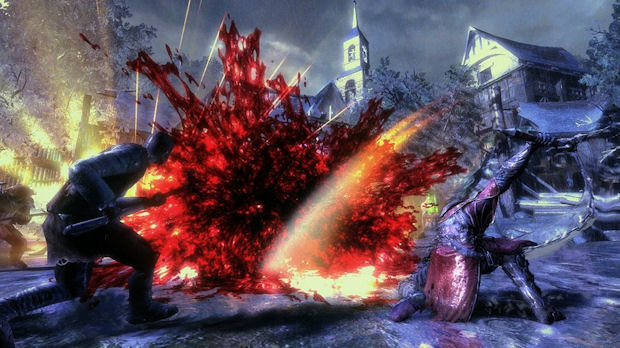 At the recent GamesCom 2009 event Konami revealed an extended trailer for their reboot of the Castlevania franchise.

Castlevania: Lords of Shadow, for the Xbox 360 and PlayStation 3, is a new third-person action-adventure game in the Castlevania series scheduled to be released sometime in 2010. The game is under development at MercurySteam and Kojima Productions with Hideo kojima involved in the production, while Konami will handle the publishing.

Storyline: Castlevania: Lords of Shadow takes place at the end of days. The Earth’s alliance with the Heavens has been threatened by a dark and malevolent force – the mysterious Lords of Shadow – darkness reigns the world. Across this shattered land, the souls of the dead wander unable to find peace, whilst creatures of evil roam free wreaking chaos and death upon the living. Gabriel is a member of the Brotherhood of Light, an elite group of holy knights who protect and defend the innocent against the supernatural. His beloved wife was brutally murdered by the evil forces of darkness and her soul trapped for eternity. Neither living nor dead she realises the horrific truth of what is at stake and guides Gabriel to his destiny – and hopefully salvation for the world… but at what cost? Thus, Gabriel must travel the destroyed world, defeating the evil tyrants in order to use their powers to bring balance back to the world. Armed with the versatile Combat Cross – the world’s last hope must encounter the three factions of the Lords of Shadow and end their unholy rule.

The shadows grow darker in this clean, extended look of the E3 2009 trailer.