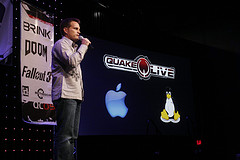 id Software at QuakeCon 2009 announced the return of the Quake Live full leaderboards, as well as new Mac and Linux support.

id President Todd Hollenshead announced this at the conference, where fans of the game and Linux and Macintosh operating systems can play it all week. If you’re at the conference, you can watch over 300 pros and up-and-coming players duke it out in Quake Live Duel and Capture the Flag championship tournaments, with $50,000 in prize money on the line.

Quake Live — the free-to-play, browser-based, improved version of the first-person shooter Quake III Arena — will be playable on Mac and Linux from Tuesday, August 18th.