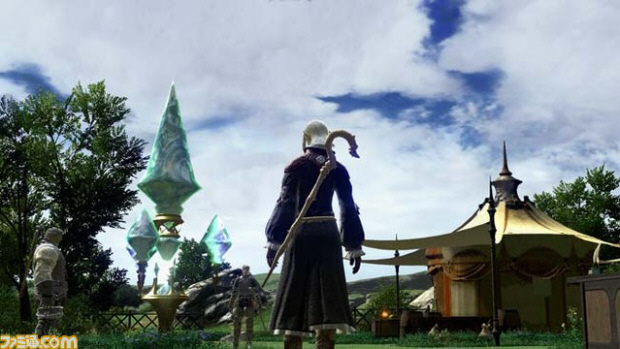 Some new story details for Final Fantasy XIV have emerged thanks to the Japanese Famitsu magazine.

Like a lot of the recent Final Fantasy games, Final Fantasy XIV’s storyline takes place on a warring continent. Called “Eorzea” in this case. Eorzea is divided up into many “city-states” full of squabling people and nations that fight amongst each other.

However in the new age, the arrival of the airborne Battleship, amongst other immensely powerful weapons, has resulted in a state of peace amongst the once enemy city-states. Since each state is now powerful enough to destroy it’s neighbors, the governments have taken a haitus on war. Because of this though, many of the nations people’s who profitted on the fighting have now found themselves with nothing to do. Thus the soldiers and mercenaries of the old world have decided to start guilds, and go searching for adventure in far away lands.

Final Fantasy XIV takes place in Eorzea which is a small continent with several surrounding islands. The game world itself will be realistic in that time will pass and weather will change. Currently one in-game day corresponds to one real world hour. Though that might change. “It won’t be like Eorzea will be night for hours because it’s nighttime in reality… I want FFXIV to be enjoyed even by those who can play only a short time out of the day, so I’d like the sort of time schedule such that it’s always a different experience timewise when you login to Eorzea,” said game director Nobuaki Komoto.

There are five races in the game which look similar to those of FFXI, but with different names. They include Hyuran (Hume in FFXI), Miqo’te (Mithra), Lalafell (Tarutaru), Elezen (Elvaan) and Roegadyn (Galka). Like in all MMO’s, you can fully customize your character in FFXIV. The Hyuran race is also further divided into Midlander and Highlander while the Miqo’te or divided into night and day versions. These sub-classes are known as Moonkeepers and Sunkeepers, respectively.

FFXIV replaces levels and experience points by concentrating instead on the specific skills and classes of your character. There are four broadly defined “job skills” in FFIV. These are: Fighter, Sorcerer, Gatherer and Crafter. Then there are sub-classes for each (like Caster, Swordsman or Blacksmith). By mixing and matching armor and weapons you can essentially change your class. Completing quests and fighting with that particular weapon or piece of equipment will advance you in that class. Which weapons and skills you choose to build is up to you.

The armory system is quite different than systems in the past, and is not that similar to the job system of prevous games even though the game includes jobs. To quote the director, “The way I see it, the player can define how his own job works,” says Komoto. “For example, if you have the Swordsman skill, that’s enough to let you play by yourself, but if you’ve also raised your Sorcerer skill enough to unlock that skill’s healing magic, that’ll make solo play a lot easier for you. You can carry enough equipment around at any given time to change your style freely, and the system makes this easy by letting you change sets of equipment all at once.”

The questing in FFXIV works by joining Guilds and receiving work passes from the guildmaster. Since everyone in the guild is working towards the same quests, it makes it easy to cooperate with others if you like. The passes available change regularly and you can complete most quests in around half an hour. “You don’t need a set number of people for each quest,” he said. “That you can work out by yourself with the other players in the guild, since they’re all there for the same goal.”

Final Fantasy XIV is due for release sometime next year on PC and PlayStation 3.