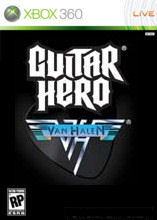 Activision has revealed the complete 47-track song list for Guitar Hero: Van Halen. The set list is made up of 28 tracks by Van Halen, from the band’s first era, with the remaining 40% being made up of other artists with a similar style to them.

This time the game is geared towards playing songs in a four-person band experience, including lead and bass guitars, drums, and vocals.

The popular music-rhythm game will be released for Xbox 360, PS2, PS3 and Wii in America on December 22nd, and in Europe sometime in 2010.