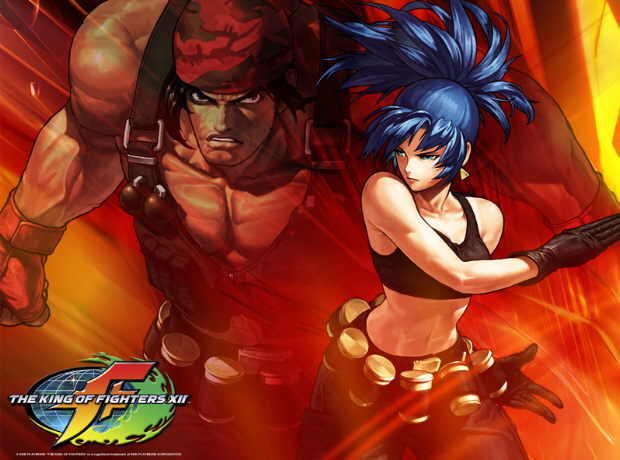 This latest installment has been completely redrawn graphically to upgrade it to the HD graphics players expect from the current generation. Each character in the game has been 100% hand-drawn. Although the game looks very nice, there are some issues with it as I and my brother address in our video review. 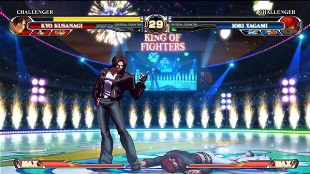 There are 22 King of Fighters XII characters in the game with most of the returning favorites from the classic series available in this newest installment. Although this is the lowest cast of any modern KoF title. The game features two “console exclusive” characters in Mature and Elisabeth Branctorche.

The online play has been heavily criticized because of the intense lag (scroll after the break for more info and a work-around), but hey at least it features online play, better some than none. The PS3 version has an exclusive online feature that allows you to form clans while the Xbox 360 features the exclusive TrueSkill leaderboard system.

So how does the game stack up for the casual player who is interested to check out this new installment in the series? And how about for those KoF veterans?

Update on the King of Fighters XII online play, straight from SNK:

“We’re pleased to announce that the next software update will address the animation glitch that users have encountered in which Elisabeth’s character sprite becomes “frozen” for the duration of the round when the character Raiden performs a specific move on her when playing online.

While software update solutions are being devised, we can offer some tips to those users who are experiencing exceptionally poor online performance. First, we suggest limiting the number of players in a room to two, as the addition of a spectator with a slow connection can currently create latency for all users in the room. Also, if your Internet connection is configured behind a firewall using NAT Type 3, we recommend reconfiguring your setup to utilize NAT Type 1 (for PS3) or an “open” setting (for Xbox 360).

Also, we’d like to take this opportunity to explain one feature of the Xbox 360 version. When playing online with the Xbox 360 version of KOF XII, players who continually battle the same opponent in multiple Ranked Matches in the same lobby will not receive additional True Skill Rank Points. This is an intentional decision to keep players from abusing the system to reap massive rewards by preying on one player. If you want to earn True Skill Rank Points, you must make a new room or leave simply leave the room and come back.”

FUN FACTOR: 6.5
The core fighting in King of Fighters XII is solid. But it has not changed a lot from previous installments and hardcore fans will notice missing moves and the like. The game also lacks much beyond the core fighting to keep you interested. No story mode is available for example.

Graphics: 8.0
The characters in this game look great. Big, bold, interesting use of colors and some good designs. However the levels are very poorly done (not to mention simply lame) and the presentation isn’t anything to write home about.

Ingenuity: 5.0
This game doesn’t do anything new that fighting game fans haven’t seen before.

Replay Value: 5.5
There are a some things to unlock in the gallery, but overall this game is extremely lacking in replay value unless you are a fan of the fighting itself and plan on playing online. Don’t go into this game solo unless you are a huge online player or have lots of friends to play with.