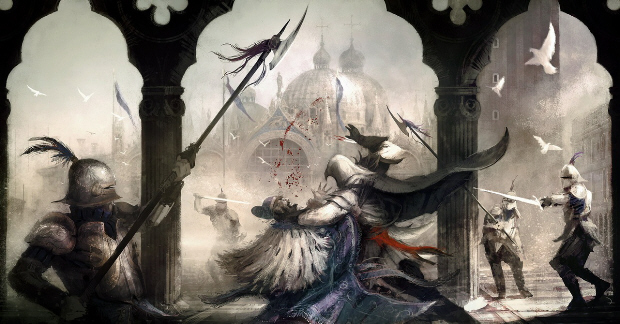 The movie is entirely shot behind a green screen to give the film a live-action CG artist look similar to that of the movies 300 and Sin City. The movie’s storyline will follow that of its main character, Giovanni, and the plot will revolve around the events of Assassins Creed 2. This information was revealed at Comic-Con 2009 at a panel entitled “Assassins Creed II: Video Games and Hollywood Converge”.

Watch all 40 minutes of Assassin’s Creed: Lineage below:

Description: “When the Duke of Milan is brutally murdered, the Assassin Giovanni Auditore is dispatched to investigate. The answers he uncovers implicate Italy’s most powerful families reaching all the way back to the Vatican itself. As Giovanni draws closer to the truth, he becomes hunted himself. He must expose the conspirators before he joins their ever growing list of victims.”

Lineage is the prequel to the Assassin’s Creed II story, revealing the machinations of 15th century Italy through the actions of Ezio’s father, Giovanni.

Episode #1: 1476, Florence. Giovanni Auditore, an assassin, attempts to thwart a conspiracy against one of Lorenzo de Medicis allies. The ensuing inquiry will take him to Milan where he tries to prevent the worst from happening.”

Episode #2: “Pursuing Sforzas assassins, Giovanni arrives in Venice where he intercepts a coded letter from the members of the conspiracy. Decoding this document in order to get to the top of the conspiracy becomes of imperial importance.”

Episode #3: “Unable to decode the letter, Giovanni decides to deliver it to Rome in order to unmask the ringleaders. But there he discovers that the conspiracy is much more widespread and dangerous than he thought.”

* Other historical figures in addition to Leonardo Di Vinci will be appear to help main character Ezio in his mission.
* The game will include “around 15 different types of assassination missions.” Ubisoft decided to throw out the old system where you did the same type of investigation over and over again. Definitely good news cause that got old.
* In a question from the audience regarding the symbols at the end of the first game and their meaning, Ubisoft’s Cory May replied, “They do have a meaning, but not the one you think it means.”

PS: You can read about 44 more video games being made into movies in our huge article on the topic.