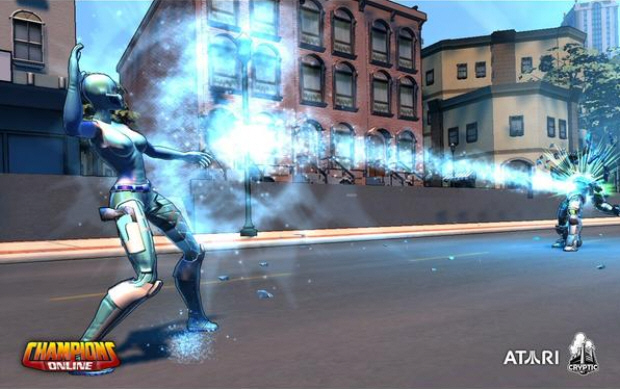 Champions Online will be released on September 1, 2009 for the PC version of the game (it will also be coming to the Xbox 360).

Champions Online is an action-oriented superhero MMO (Massively Multiplayer Online game) that is loosely based on the pen-and-paper RPG Hero System ruleset. The game is being developed by City of Heroes/City of Villains developer Cryptic Studios.

This game will feature a much more robust character creation tool than Cryptic’s previous titles. The character creation system includes the ability to set how your character will move (such as robotic or animal-like) and how your powers will manifest themselves, in addition to customizing player look and color. Players will also create an arch-nemesis for their hero to battle throughout the game. The game lacks a class-based system, opting instead to allow all types of characters to use any type of power. The game is also one of the first that will allow PC players and Xbox 360 players to play together!

Here is a look at the game’s character creation system.

Story Synopsis
Earth’s first and best line of defense is its heroes. For generations, brave men and women have answered the call to protect the world from the villains who threaten its safety and security. Led by The Champions, protectors of Millennium City, the world’s heroes have launched a crusade for peace, security and justice. But they need allies. Defender is calling for a new generation of superheroes to fight in a war against evil that spans the globe — and beyond.

Key features of Champions Online include:

* The character creation system is bar none the most exhaustive and flexible system to date. With hundreds of unique costume pieces, the ability to alter and re-color each piece, the option to select which powers your hero will use and the ability to change the powers’ colors as well, there are limitless customization options in Champions Online.

* Champions Online will be the first massive multiplayer online action title to allow Xbox 360 and Windows gamers to play online with each other simultaneously.

* Varied, Expansive Environments: Rather than taking place in a single city, Champions Online takes place over the entire Earth and beyond. Huge environments such as Millennium City, monster infested islands, creepy underground ruins, even outer space.

Here is a trailer showing off the kind of missions you will be undertaking.