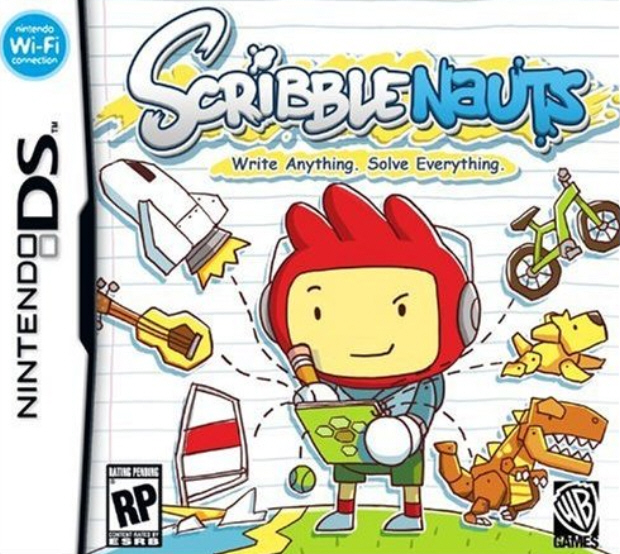 Scribblenauts is getting a North American release date on September 15th, 2009 (September 25th in the UK) for the Nintendo DS.

As we’ve been reporting, the game is a unique platformer in which players summon objects into the world by writing the name of objects. These objects then come to life and help the player to reach and collect “Starites”.

The game will also be quite large with over 220 levels to keep players writing for quite a long while.

Here is a gameplay trailer for the game, showing how you can bring objects into the game. The keen eye of reader Jacob noticed a nice cameo at 0:36 into the video, when a mini Gordon Freeman wields a crowbar!

Key features of Scribblenauts include:

* Create Your Own Interactive Experience: Objects you write down in the game are only limited by your imagination.
* 220 levels of single player, pick-up and play fun.
* Everyone Can Play: All-ages Ppick-up-and-play fun for everyone.
* Touch-screen Controls: Easy to pick up and play on Nintendo DS. If you can tap, you can play!
* Innovative side scrolling action where objects spelled out to solve spatial puzzles become real and combinable in-game and can be reused.
* Unlimited Replay Value: Use less objects to increase your score, or experiment with different objects for endless replay value. Write anything; solve everything!
* Over 10,000 objects: 5 people spent every working hour for six months coming up with all the objects they could think of. The result is over 10,000 in-game objects that will come to life when you think of it and jot it down.
* Thousands of in-game items available in game, but which must be acquired wirelessly from different hot spots, making this the new standard in mobile gaming.
* Playground Mode: Play the entire game in a sandbox style right on the title screen.
* Create and Share Levels Online: Share levels you create with the Level Editor via Nintendo DS Wi-Fi Connection.
* Innovative New Title from Leading Developer: 5TH Cell, the creator of the Drawn to Life franchise and Lock’s Quest, has experience creating high-quality, innovative DS games.