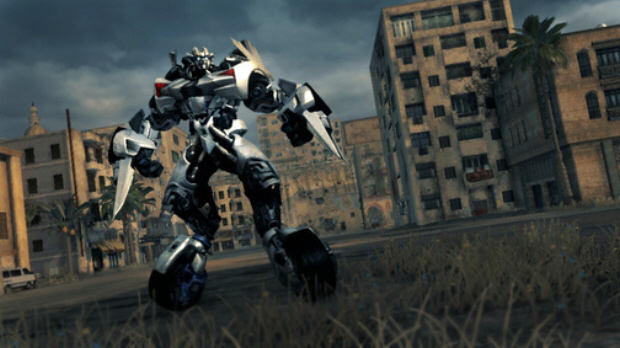 Transformers 2: Revenge of the Fallen the video game is getting a DLC content pack announced Activision for the Xbox 360 and PlayStation 3 versions.

The $10 “Character and Map Pack Plus” expansion pack will include 11 new playable characters including fan favorites like G1 Starscream, G1 Optimus Prim, G1 Megatron, G1 Sunstorm and favorites from the film like Sideswipe, Soundwave, Jazz and Jetfire (the later only in multiplayer, the rest in both single- and multiplayer). New skins are available for fan-favorite characters including Stealth Colors BUMBLEBEE, “Generation One” Colors RATCHET and “Generation One” Colors SIDESWIPE. And a new Expert difficulty mode for the single-player campaign. There will also be a new set of leaderboards for the Expert mode in singleplayer.

Additionally, three new multiplayer maps extend the diverse set of battlefields on which players can battle with or against their friends. Courtyard is set on the U.S. east coast, where players battle in a metropolitan setting surrounded by open skies and tall skyscrapers. Hillside takes players to the urban backdrop of Cairo, where players will fight in the war-torn streets and alleyways of a ruined cityscape. Sandstorm transports players to yet another section of Cairo, populated with low buildings and wide-open regions perfect for instantaneous, frenetic action.

There will also be new Achievements and Trophies to earn.